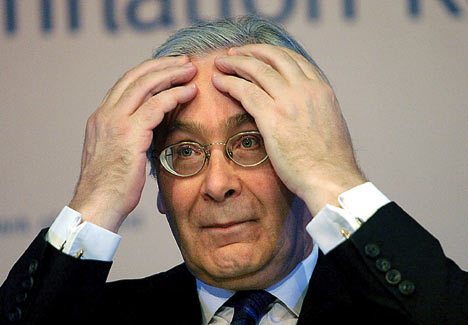 Outgoing Bank of England governor Sir Mervyn King was on Thursday denied his parting wish for more stimulus to lift the UK economy at his final meeting of the monetary policy committee. The central bank left interest rates on hold at 0.5% and refrained from implementing a fresh round of quantitative easing (QE).

That means King was probably outvoted for the fifth time running. Minutes published later this month will reveal whether Sir Mervyn stuck with his call for more QE at his 194th rates meeting, reports The Guardian.

For the past four months, three MPC members, including King, have advocated a £25bn extension of QE, but have been outvoted by their colleagues, who are concerned that inflation remains well above the government’s 2% target.

Howard Archer of IHS Global Insight said the committee would go for more QE “eventually” but it would probably be a way to welcome incoming governor Mark Carney, rather than a parting gift for King.

“Carney will only have one vote out of nine in the MPC, as does King, but we suspect that he will be able to carry a majority of MPC members with him should he favour more help for the economy (which we believe he will unless there is sustained clear overall improvement in the data over the coming weeks),” he wrote.

Recent surveys suggest the UK economy regained some of its former vibrancy in May after a bigger than expected surge in services activity showed that all major sectors are now growing for the first time in a year.

Following figures earlier this week that found the construction and manufacturing sectors back in positive territory during May, the CIPS/Markit survey of the services sector showed it too expanded more strongly than expected. Manufacturing activity grew at its fastest pace for more than a year while construction output rose for the first time since last October, helped by the boost to housebuilders from the government’s Help to Buy scheme. Activity in services was also growing at its briskest pace for more than a year and firms reported that they were employing more workers, spurring a fifth straight monthly rise in services sector employment.

The broad-based recovery is likely to end the debate about a triple-dip recession, especially after the economy grew in the first quarter of the year by 0.3%. It is now showing every sign of outstripping that figure in the second quarter.

Economists said the data put the UK on track to hit the Bank’s forecast of 0.5% growth in the second quarter.