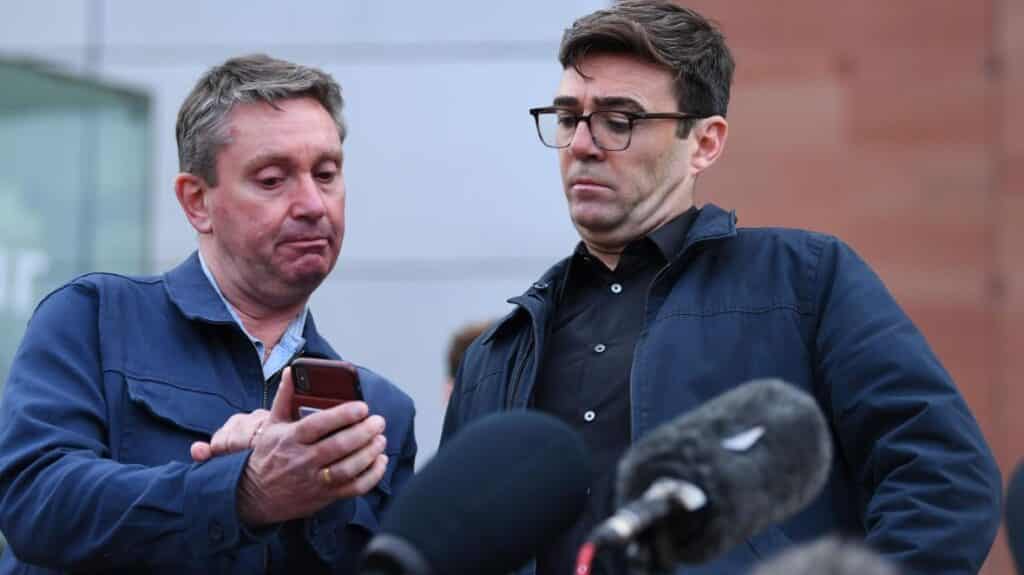 Boris Johnson imposed tougher coronavirus restrictions on Greater Manchester last night and attempted to use a £60 million rescue package to make its mayor fall into line.

Mr Johnson pulled the plug on talks with Andy Burnham over the scale of the funding despite the two sides being separated by only £5 million. Mr Burnham had wanted £65 million to support businesses.

The prime minister then put the region’s three million people into the highest tier of the Covid-19 alert system and refused at a press conference to guarantee the original £60 million package in an apparent attempt to punish Mr Burnham. Although Downing Street said later that it remained on the table, Matt Hancock, the health secretary, made it conditional on “further discussions” with local leaders.

Mr Johnson’s row with Mr Burnham has proved the biggest stumbling block for his system of tiered restrictions announced this month and has exacerbated north-south political resentment.

The mayor had said that £65 million was the “bare minimum to prevent a winter of real hardship”. He pointed out that residents had been living under local restrictions for three months, which had “taken a heavy toll” on them.

Government figures blamed his “pride” for the failure of negotiations at lunchtime yesterday. Downing Street said that his demand was indefensible to Merseyside and Lancashire, which had agreed deals.

Mr Burnham said that Mr Johnson was “grinding people down trying to accept the least that they can get away with” and accused him of playing poker with people’s lives.

Lisa Nandy, the Wigan MP and shadow foreign secretary, said that the government seemed to be waging war on Greater Manchester. “I grew up under Thatcher but I’ve honestly never seen anything like this,” she said.

Jonathan Van-Tam, the deputy chief medical officer for England, offered a boost to Mr Johnson’s strategy by saying that a national circuit-breaker lockdown would be difficult to justify for areas with low infections.

He said that “in the areas where it is out of control hard measures are needed. But do I think right now it is appropriate to insist on those similar hard measures in for example, the southwest of England or Kent, where levels of disease are really very, very much lower than in the north of England? No, I don’t think that’s right.” He added that “a national lockdown, at the moment, would be inappropriate for communities in Cornwall and East Anglia”.

At the same Downing Street press conference, Stephen Powis, the NHS England medical director, said that in two weeks Manchester hospitals would have as many Covid-19 patients as at the peak and Liverpool’s biggest trust would exceed its April numbers tomorrow. “That shows just how fast we can see infection rates and hospital admissions rise if we don’t get this under control,” he said.

The prime minister said regulations for Greater Manchester would be laid in parliament on Thursday and come into force just after midnight.

Pubs and bars will be closed, unless they are serving substantial meals, for a 28-day period, along with betting shops, casinos, bingo halls, adult gaming centres and soft-play areas.

“I know that these restrictions are tough, both on businesses and individuals — believe me, no one wants to be putting these things into effect,” he said.

The measures could lead to the closure of more than 1,800 pubs and 140 wine bars, as well as 277 betting shops and 12 casinos, according to Altus Group, a commercial property adviser.

Manchester businesses voiced support last night for the stance taken by Mr Burnham, as well as confusion over what financial help was now on offer from Friday.

“I think Boris Johnson doesn’t give one damn about Manchester as long as the south is protected,” Tim Flynn, 43, who has run the New Oxford pub in Salford for 14 years, said. “The general mood is one of deflation, absolute deflation.”

Karina Jadhav, owner of the Menagerie restaurant in Manchester city centre, said that she could not understand why the government did not guarantee the original offer when negotiations fell through over funding.

“It’s playing with people’s livelihoods for political point-scoring, that’s how it feels, which is very frustrating when you are living in it and trying to operate a business,” she said.

Sir Richard Leese, leader of Manchester city council, said: “It is deeply disappointing and frustrating that the government has unilaterally imposed tier 3 restrictions on Manchester and the city region without the agreement of local leaders.

“While we recognise the need to get Covid-19 cases down, this has to factor in measures to protect the most vulnerable and balanced with doing all we can to protect the livelihoods of those who will be put out of work through pubs, bars and other licensed premises being forced to close.”