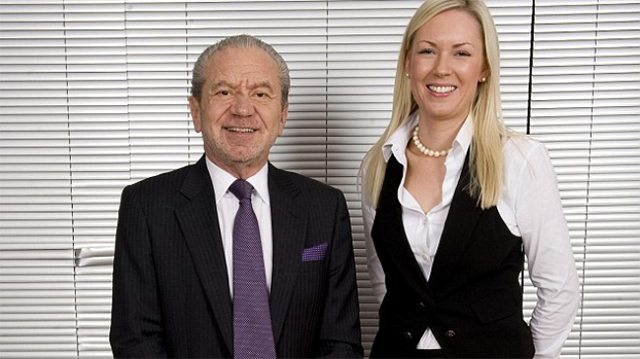 Stella English beat 15 others to win series six of the BBC1 show in 2010, but just over a year later the pair fell out badly that she claims Sugar told her that  he didn’t ‘give a s***’ if she left.

English, who had previously been employed by Nomura bank on an annual salary claimed to be £82,500, said she had no real role at Viglen and was not taken seriously by her colleagues. English went onto say that she did not feel like Sugar’s ‘apprentice’ as she only saw him five times during her 13-month employment.

The show winner was given a role in Lord Sugar’s Viglen division, supplying IT equipment to academy schools, but she said that when she was told her they would not be renewing her contract she was given no choice but to resign.

She said the job ‘became increasingly untenable to continue and she phoned Lord Sugar in May 2011 and asked if she could meet him. However ‘he made it abundantly clear that he didn’t want to see me’, adding that she told Sugar ‘I have tried so hard for so long and it’s not working. I’m an overpaid lackey at Viglen.’

‘My pride would not allow me to continue doing it.’ English said and she went on to explain that Lord Sugar did offer her a role in another company which she started in June 2011.

‘I decided to take up the position due to pressure from Lord Sugar who gave cause for concern that there might be adverse publicity due to me resigning,’ she said.

English, painted a fairly damming picture of the role she had been fighting for over the series, describing the first day of a four-month probationary period she and the other semi-finalist had to carry out before one of them was declared the winner, said: ‘No specific duties were allocated to me.

‘I was provided with a desk and a phone but that was pretty much it.’

Ms English fought back tears as she said she was given no guidance about what she was meant to be doing, and was ‘ostracised’ by her colleagues who told her she had taken over another women’s job which had a salary of £35,000.

Relegated to carrying out basic administrative tasks, English said her employment was a ‘sham’ adding: ‘The career-enhancing opportunities that The Apprentice position had been sold as simply failed to materialise.’

That September, she was told Lord Sugar would not be renewing her contract, she said.

She said she had begun to enjoy working at YouView and was aiming for a business development management position.

She said: “That was the bombshell that I wasn’t really expecting at all.

“Until that moment I had believed that I was doing a good job. I thought that he would be happy that I wasn’t hassling him.”