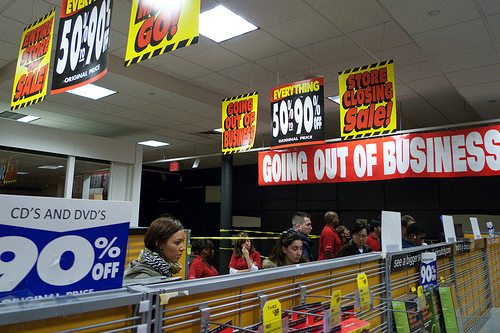 The retail trade sector alone (not seasonally adjusted) showed an 8% reduction in the number of administrations compared to the figures recorded for Q1 2012, with 52 businesses entering into administration, compared with 57 in Q1 2012.

From the recent June sale figures released by The Office of National Statistics, clothing and footwear could be considered to be the drivers behind the sector’s better performance.

Q2 has proved to be a more buoyant quarter for retail than Q1 due to consumers taking advantage of the extra holiday provided by the Jubilee and early sales and promotions. Additionally the drop in inflation has eased the pain suffered in Q1.

Despite 2012 witnessing a number of high profile collapses, a number of these brands are fighting for survival through a formal process.

One example being Clinton Cards, which was bought out of administration by American Greetings Corporation, saving 397 shops and numerous jobs in the UK.

Commenting on the retail sales figures, Philip Duffy, partner at leading global financial advisory and investment banking firm, Duff & Phelps, stated: “Although the recent sales figures for June were not as high as hoped, compared to the same period last year, there is an improvement of 1.6 % in sales volumes. Low inflation, the Jubilee celebrations and summer sales being brought forward have successfully combated challenges such as quarter rent day, poor weather and drop in footfall.

“The changing economic environment has now made it necessary for UK retailers to adapt to an evolving consumer landscape and many are working towards that change. A prime example of one traders’ market place which has changed dramatically is The Game Group plc. Its customers are increasingly downloading and purchasing online and so are less inclined to visit the stores. This loss of footfall can have a dramatic effect on revenues for a business.

“Bucking previous trends, the SME market faired well in June 2012 with an increase in the value of sales of 4.1% compared to June 2011, whereas the larger stores were just estimated to have an increase of 1.2%. Consumers are increasing their online shopping and are demanding a more personal and time savvy shopping experience. Those retailers that can add value as well looking to reshape their business accordingly will fare well.”

However, some believe that the figures are not showing a true picture as Christopher Shaw, CEO of alternative finance provider, Platform Black, commented: “While there are some crumbs of comfort in that the total number of company liquidations is falling, the reality behind the numbers is that things are as tough as ever for business.

“There are many reasons why companies are failing, from weak business confidence, consumer demand, the never ending Euro crisis and the consequent lack of finance for SMEs .

“Banks, in many instances, won’t offer overdraft facilities, are reducing them or even withdrawing them altogether. This is putting an unbearable strain on the UK’s SMEs, even those that are perfectly viable — and sending them to the wall.

“Any improvement in the corporate landscape is contingent upon the Funding for Lending scheme being more than just words.

“For fewer companies to fail, we need to see actions not words.

“Many vibrant businesses are struggling as in many cases the banks cannot, or will not, provide access to credit.

“Thankfully, and as the Business Finance Partnership confirms, more and more of the UK’s SMEs are turning to alternative sources of finance to keep them going.

“Many companies are going to the wall for the simple fact they can’t pay their staff or suppliers on time due to late payers. It’s a travesty when this money is in the pipeline but they just can’t access it on time, and go bust because they haven’t got an overdraft in place to cover the shortfall.”