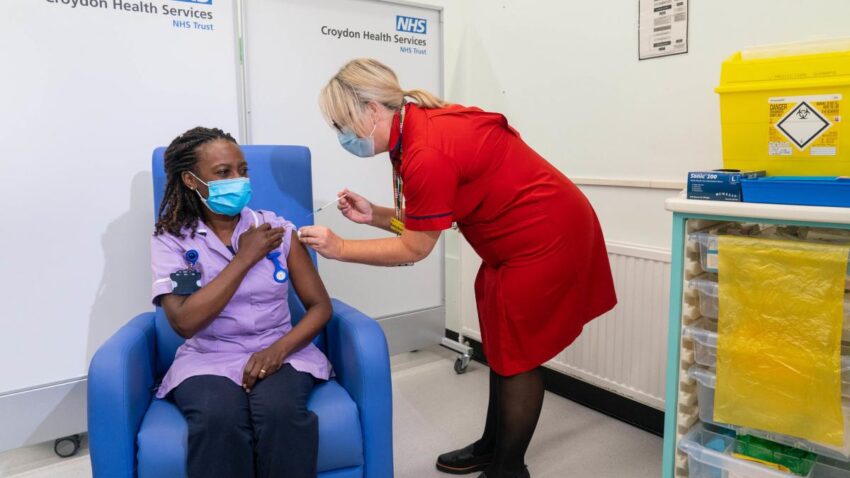 A fourth coronavirus jab for British adults has moved a step closer after the government rushed through a deal for more than 100 million extra doses that can be tailored against variants.

Sajid Javid, the health secretary, has agreed to buy enough extra doses to repeat the entire vaccination programme to date as he promised to “future proof” the NHS jabs drive.

The deal, which is likely to cost more than £2 billion, was accelerated in response to concern that the Omicron variant may evade the present vaccines, and includes clauses giving access to ones that are modified to target new strains.

Ministers are relying on a booster programme “on steroids” to protect the nation against Omicron this winter and have pledged to offer all English adults a third jab by the end of next month after scientists said that third doses could be accelerated.

The NHS has not issued detailed guidance on how the programme will be implemented. GPs said yesterday they could not increase provision of booster jabs without cutting back on other care.

A letter due to be sent to vaccination centres with instructions about the new booster drive was delayed as the government sought to finalise agreement on allowing family doctors to abandon some paperwork so that they do not have to reduce routine appointments.

Ten more cases of the Omicron variant were confirmed across the UK yesterday, taking the total to 32. Javid said last night that they would rise further.

“There’s no indication to suggest that the vaccines won’t work,” Maria Van Kerkhove, the WHO’s technical specialist for Covid, said. “Even if there is a reduction in efficacy, it’s still better to have the vaccine because it will save your life.” She said that more information about the transmissibility of the variant and whether it caused more severe illness was expected “within days, not necessarily weeks”.

The organisation cast doubt on the adoption of booster programmes in wealthy countries, insisting that vaccinations would do more good in developing countries. Soumya Swaminathan, its chief scientist, said that “there isn’t a whole lot of evidence” that all adults would benefit from a third dose.

Accusations that rich nations are hoarding vaccines are likely to intensify after Britain announced last night that it was buying 114 million more doses from Pfizer and Moderna.

The vaccines are due for delivery later next year or in 2023 and increase the likelihood of a further round of booster jabs next winter. While it is not yet clear that annual boosters will be needed, ministers want maximum flexibility and Javid said he would ensure that Britain had “the vaccines the country needs to keep this virus at bay”.

The deal includes provision for the deliveries to include modified vaccines targeted against the Omicron variant or future strains. Javid said: “These new deals will future-proof the Great British vaccination effort — which has so far delivered more than 115 million first, second and booster jabs across the UK — and will ensure we can protect even more people in the years ahead.”

Ministers say that spare vaccines will be sent to other countries in need of them and that Britain will have sent more than 30 million doses abroad by the end of the year and 100 million by the middle of next year. Only 11.5 million have been delivered so far. Analysis for The Times suggests that a quarter of doses pledged by the West to poorer countries have arrived.

Gordon Brown, the former prime minister, accused Europe and the United States this week of sitting on a stockpile of 500 million unused doses.

Yesterday scientists cast doubt on claims by Israeli media that early data showed vaccines were almost as good at protecting against the Omicron variant. According to a report by the broadcaster Channel 12, new findings showed that the Pfizer jab was 90 per cent effective at preventing symptomatic infection from Omicron compared with 95 per cent for Delta. It was not clear, though, where the data had come from or how it was calculated as there have not been enough cases in Israel to provide an efficacy estimate and not enough people in South Africa, where the variant was first detected, have received a booster jab.

Simon Clarke, from the University of Reading, said he found the report “puzzling”. He said: “The finding that people boosted with the Pfizer vaccine are well protected is baffling at this stage. To make such an observation you’d need a large number of boosted people who’ve been exposed to Omicron. There are hardly any infections in Israel, so it seems unlikely that there’s been anything like enough exposure to arrive at these findings. Similarly, there has been no booster programme in South Africa.”