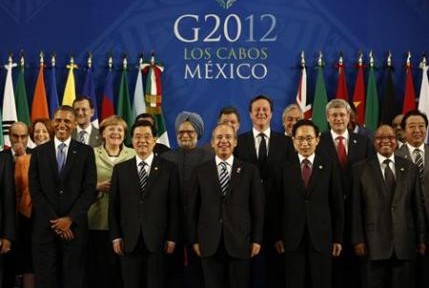 They voiced unease over what one top official described as “the single biggest risk for the world economy” reports The BBC.

But European Commission President Jose Manuel Barroso said “the challenges are not only European, they are global”.

Sunday’s victory of a pro-bailout party in the Greek election did not give stock markets the expected boost.

Antonis Samaras, the leader of the New Democracy party that narrowly won the poll, is holding urgent talks to form a coalition.

Mr Samaras also reiterated that he would seek changes in the terms of a bailout agreement reached with the EU and IMF.

BBC World Service economics correspondent Andrew Walker says that while Europe is clearly the big danger, there are also problems elsewhere in the world’s major advanced and emerging economies, starting with the two largest national economies, the US and China.

The slowdown in India is something else for the G20 to fret about at the Mexican resort of Los Cabos, our correspondent adds.

A draft of the statement to be released on Tuesday is expected to call for a co-ordinated global plan for job creation and growth, reports say.

And if growth weakens, the proposed document says, countries without heavy debts should “stand ready to co-ordinate and implement discretionary fiscal actions to support domestic demand”, according to Reuters.