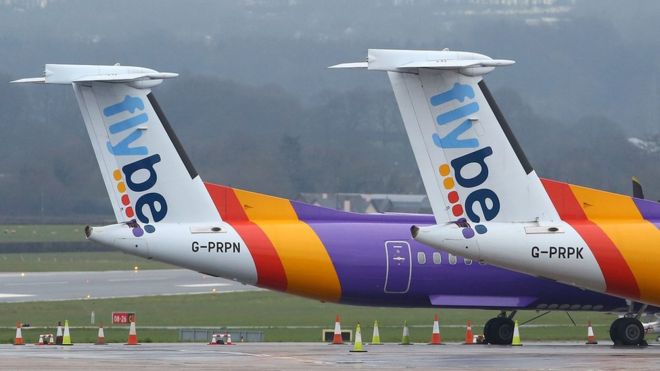 Dozens of routes serving the UK’s regions could be left without services after the collapse of Flybe.

Scotland’s Loganair has committed to maintaining 16 routes, but many smaller airports still face gaping holes in their schedules.

The carrier, Europe’s largest regional operator, went into administration early on Thursday, after a bid for fresh financial support failed.

Flybe boss Mark Anderson said he was “very sorry” for the firm’s collapse.

He told staff one of the firm’s shareholders had pulled out at the start of this week, and he had spoken “frantically to the government” asking for rescue aid, but that they had run out of time on Wednesday night.

What is happening to Flybe’s flights?

All of Flybe’s flights have been cancelled and customers with bookings should not travel to the airport unless they have arranged an alternative flight.

Flybe operated 210 flights, serving the UK’s regional airports and dominating routes out of Southampton, Exeter and Belfast. But it also linked regional airports with more than a dozen other European destinations.

In response to the collapse, the UK government said it would work with other airlines to replace services.

She said: “We recognise the impact that this will have on UK airports particularly those which have large-scale Flybe operations.”

Will the regions lose those services?

Although Flybe is small compared to the likes of British Airways, Ryanair or EasyJet, the loss of the operator has been described as “disastrous” for UK regions.

Air transport expert John Strickland said Flybe is “small in the scale of the UK market as a whole, but if you’re flying out of Exeter, Newquay or specifically Southampton it really is one of the only airline choices… so a number of regional groups will risk not being served”.

However rival airlines are interested in operating at least some of the routes.

Loganair has opened a special recruitment line for former Flybe employees as it works on plans to salvage services on 16 of Flybe’s 120 routes. They include flights from existing bases for Loganair, including Aberdeen, Edinburgh, Glasgow, Inverness and Newcastle.

Belfast City airport said it was in talks with multiple airlines to fill the routes left empty; 77% of its routes were operated by Flybe.

Brian Ambrose, chief executive of Belfast City Airport, said he was “pleased” that Loganair will backfill routes between Belfast and Aberdeen and Inverness, less than 24 hours after Flybe entered administration.

Tim Jeans, chairman of Cornwall Airport, said that he “very much hoped” that other airlines would take up vacant routes. He said discussions with other airlines would “begin in earnest” soon and he hoped to reinstate services “on those routes hopefully within weeks rather than months”.