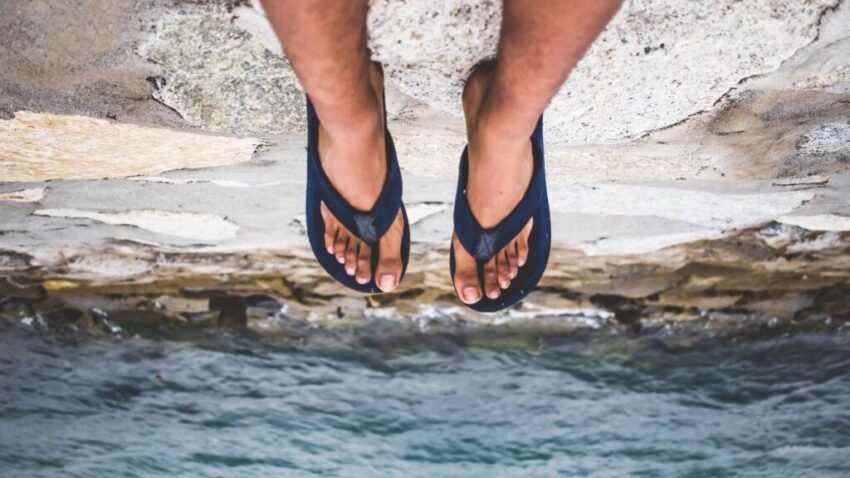 Flip-flops, the footwear that conjures up barbecues and bad tan lines, are having a moment during this unusual lockdown summer when our lower halves have often been hidden, at least to colleagues if not neighbours, on video calls.

Searches for flip-flops have increased 53% since June, according to online fashion search business Lyst, with demand for Havaianas up 89% month-on-month. And while flat sandals in general are proving popular, “flip-flops in particular have seen something of a resurgence as an alternative to the classic Birkenstock”, according to Selfridges accessories and shoes buying manager, Josie Gardner.

On the one hand, they’re an odd choice for lockdown, as they’re not going to hide the podiatric horrors of the last few months with salons closed. But on the other hand they’re perfect for a world in which you don’t have to worry about your boss seeing your toes. According to Jesse Burnett, co-founder of footwear brand Tkees: “With remote work more popular than ever, buying patterns no longer have to centre around office attire or what someone’s workplace might deem acceptable”.

The way everyone dresses has been shifting. Flip-flops are symptomatic of the new ease that has taken over our wardrobes – elasticated waists are in and flips flops are their footwear equivalent.

“Today, consumers are buying what they want to wear, rather than what they have to wear,” says Burnett. In this context, flip flops, along with other comfortable, “ugly” shoes such as Birkenstocks and Crocs, are doing well.

Even in high-fashion, a world in which the impractical is often celebrated, influencers are teaming flip-flops with the oversized, forgiving dresses that have taken over Instagram feeds this summer. Net-a-Porter’s global buying director Elizabeth von der Goltz cites their street style moment during Copenhagen fashion week, “where Scandinavian girls were spotted incorporating Havaianas into their outfits”, as one reason they might now be having their moment in the sun.

The specific context of 2020 to one side, there are many things to recommend the beachy classic. “It is an exquisitely concise form of footwear,” says Elizabeth Semmelhack, senior curator of the Bata Shoe Museum in Canada. “It does a very effective job of protecting the foot with a minimal amount of material.”

While in politics to “flip-flop” is a bad thing – see Boris Johnson’s jibe that Keir Starmer has “more flip-flops than Bournemouth beach” – it is the shoe’s malleability that means it can be all things to all people.

The simple design can be riffed on, made fun with bright colours, or minimal with neutral tones – the luxe leather and suede platform take from New York brand The Row is proving to be one of Net a Porter’s most popular styles, according to von der Goltz, “in spite of the high price point” – they would be available for £725 if they weren’t already sold out.

For such an easy breezy summer classic, there is a lot of contention about the flip-flop’s roots. Many people cite the Ancient Egyptians as the style’s forefathers – they weaved theirs out of grass, papyrus or palm leaves. Or, in the case of Tutankhamun, had them decorated with gold, birch bark and even bone.

In 2020 the flip-flop is breaking new ground: perfect for staycations, gardening and popping to the shop, they are also, for the many office workers now confined to kitchens and bedrooms, the perfect footwear for board meetings and brainstorming sessions.