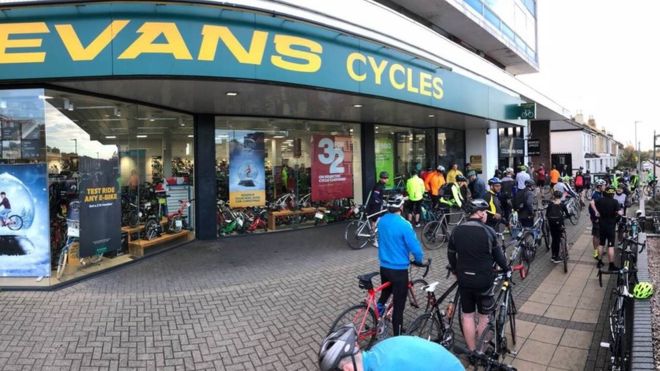 Evans Cycles has put itself up for sale as it seeks fresh funding amid tough High Street trading conditions.

The BBC understands PwC is in talks with a number of potential buyers for the bike store chain, which has more than 60 outlets in the UK.

The consultancy has asked for final bids by the end of next week, but Evans is not thought to be seeking a rescue deal.

Concerns over the retailer’s financial position first emerged in September, when Sky News reported the chain was seeking an emergency cash injection from its lenders.

Like other retailers, Evans has struggled with the recent slowdown on Britain’s High Streets that has led to the demise of brands such as Maplins and Toys R Us.

High Street cycling retailers also face mounting competition from online rivals such as Wiggle, which have eaten into their market share.

As first reported by Sky, Evans is thought to need at least £10m to keep up with obligations over the coming months.

However, it is not thought to be considering a company voluntary arrangement (CVA) – a form of rescue deal that would allow it to shut stores and slash rents without going bust.

The controversial insolvency process has been used recently by retailers such as New Look, Mothercare and Homebase.

It was bought by private equity firm ECI Partners for £80m in 2015, but has had a bumpy ride since then.

In April, the chain sacked its chief executive Andy King amid reports he had failed to turn the business around.

Mr King, who joined Evans in November 2016 amid profit slump, was replaced by Alan Fort – the firm’s third new boss in two years.

According to Companies House, earnings at Evans’ parent company, April Topco, fell from £2.2m to £2m in the year to 28 October 2017. However, turnover increased slightly to £138.8m.