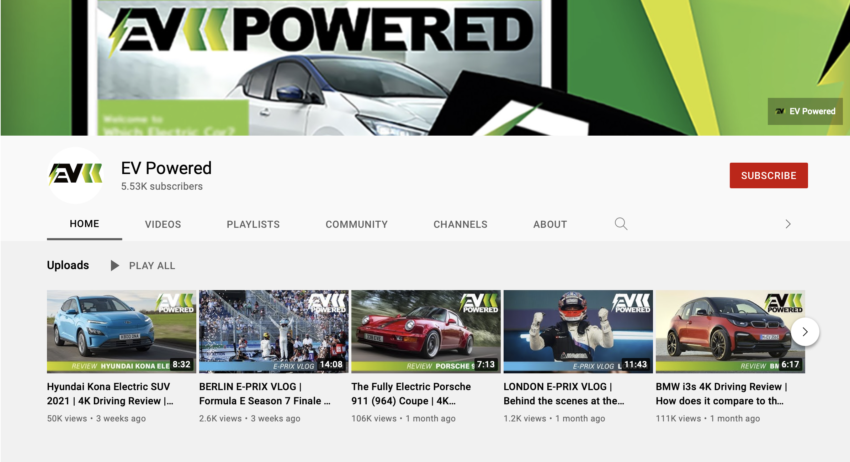 The YouTube channel has been active for just under a year and in that time, EV Powered has worked with some of the major manufacturers, including Audi, Jaguar and BMW, to produce a number of in-depth reviews of electric vehicles.

The majority of videos have received around 100,00 views, with the channels most popular video, the review of the Nissan Leaf e+ Tekna, racking up 201,000 views.

A recent addition to the channel has also been the Formula E travel vlogs, with EV Powered’s senior reporter, Charlie Atkinson, taking viewers on a ‘behind the scenes’ journey of both the London E-Prix and Berlin E-Prix. The vlogs will continue next year into season eight of the ABB FIA Formula E World Championship.

The channel is continuing to grow with a number of exciting videos and projects lined up, including a review of Tesla Model 3 which will be released over the next few weeks.

Atkinson commented: “It has been an action-packed year for EV Powered, having worked with some of the biggest OEMs to film our electric car reviews and travelling to the different Formula E weekends for our vlog series. It is a great achievement to reach one million views on the channel and I can’t wait to share all the exciting projects that we have lined up.”

Richard Alvin, managing director for EV Powered’s publishers Capital Business Media, added: “We’re delighted with how the channel has grown in its first year and it proves the appetite for electric vehicles is growing day by day.

“This milestone also cements the fact that EV Powered is fast becoming the authoritative figure within the EV community and with lots more lined up, we encourage anyone who hasn’t already subscribed to the channel to do so!”

EV Powered’s portfolio also consists of a news website which is updated daily, as well as the Everything EV Podcast, which is available on all streaming platforms.