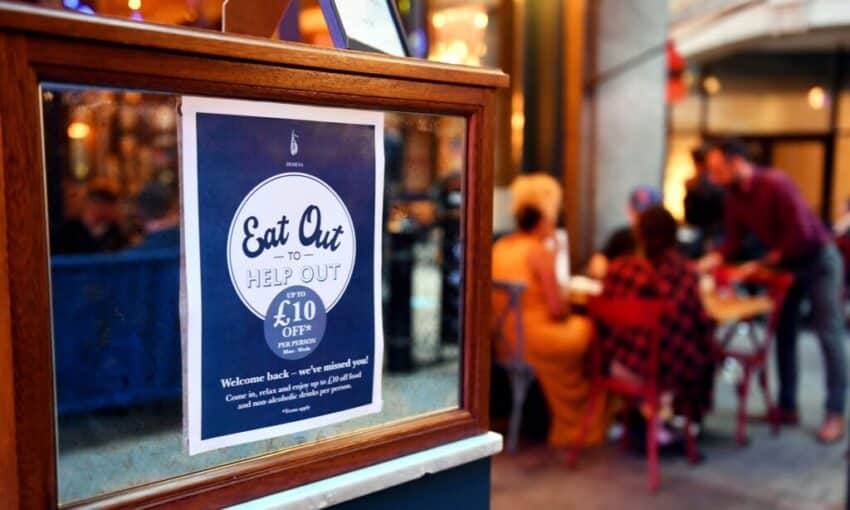 The UK government’s eat out to help out scheme triggered a surge in the number of people visiting high streets and shopping malls last week, especially during the evenings.

Between Monday and Wednesday – the first days of the half-price meal offer – footfall rose 18.9% after 6pm across the UK’s high streets, shopping centres and retail parks, according to the retail analysts Springboard. The scheme also boosted visitor numbers between 12pm and 2pm, when they rose 9.6%.

Smaller market towns benefited the most, with footfall up 25% over the first three days of last week, while regional cities recorded a 19.2% gain.

Over last week as a whole, visitor numbers at high streets, malls and retail parks rose 3.8% from the week before. High streets did best, with footfall up 4.5%.

The figures suggest the scheme, which was launched by Rishi Sunak to help the struggling restaurant sector, has also benefited retailers, which have been equally hard hit by the Covid-19 pandemic.

The chancellor’s initiative offers a 50% discount, up to £10 per person, at participating venues during the month of August between Monday and Wednesday, typically the quietest days of the week. It got off to a roaring start last week, when queues formed outside many restaurants and cafes all over the UK. More than 72,000 establishments have signed up to the £500m scheme, ranging from independents to mainstream chains and Michelin-starred restaurants.

It is a much-needed boost for pubs, bars and restaurants as consumers had been slow to return after they were allowed to reopen in early July. All shops in England were able to reopen from mid-June after a three-month lockdown. This triggered a 45% surge in shopper numbers in the week starting 15 June on the previous week, according to Springboard, but footfall rises have been far more subdued since then.

Footfall across all UK retail destinations remains more than a third lower than in 2019, with a year-on-year decline of 34% last week.

While footfall indicates the number of people going to malls and high streets and does not measure their spending, the latest figures bode well for sales at shop chains. UK retail sales jumped 13.9% in June from May, according to official data, taking them close to pre-lockdown levels.

Diane Wehrle, the insights director at Springboard, said: “It is clear that it was the post-6pm period that yielded the greatest rise in footfall and also that smaller towns benefited more than large city centres. As the scheme continues throughout August and more Britons enjoy staycations across the UK, time will tell if the government scheme provides the boost that retail destinations across the country require for business survival.”