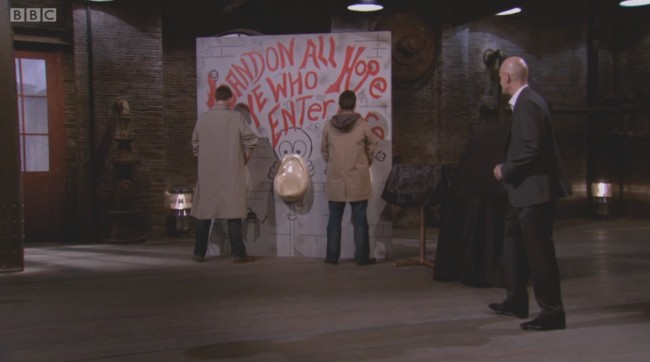 Providing an answer to a germaphobes worst nightmare, Loo-dini presented the Dragons with a product to keep anyones hands squeaky clean in any public toilet. After a dull pitch and stiff demands, the entrepreneur faced an unenthusiastic investors panel, with Touker and Deborah refusing to invest, before Nick dealt another blow to the businessman’s hopes. Peter softened the blow with an element of understanding to the product, but wasn’t willing to make an offer. Sarah was less considerate, and abruptly ended the entrepreneurs chances of securing an investment.

The owner of Tags Crisps wowed the Dragons with an excellent CV and impressive numbers, but the investors panel wasted no time in digging into the proposal. With such dazzling numbers and a rich history in the food industry, Sarah was confused as to why the entrepreneur needed an investor on his side. With resilience to match his glowing figures, the entrepreneur stood firm amongst stiff questioning from Deborah and Peter. With the Dragons turning on each other as negotiations heated up, the owner of Tags Crisps mustered up a deal with Deborah and Peter, and walked away with all the money he asked for, and shared a twelve and a half per cent stake in his business with the two Dragons.

A company which makes wooden mechanical kits entered the Den next, and had all the Dragons fascinated. After showing initial interest, Deborah raised some questions, digging into the history of the small, Welsh business. Touker and Deborah disagreed over the benefits of UK production, but Sarah had some bigger issues. With differences in opinion over whether the product should remain niche or enter the high street, Sarah refused to invest when the passionate entrepreneur had ambitions to keep the small, wooden toys off the high street shelves. With all the other Dragons out, Touker swopped in with an offer £40,000 for a 30 per cent stake, which the group of entrepreneurs accepted after a moments deliberation.

The final proposal proved the most controversial, as a couple of entrepreneurs representing their seaweed seasoning company caused a stir in the Den. With confusion over numbers, Peter Jones took a distaste to a rude and ignorant pitch, calling it his worst experience in the den in 10 years. Deborah voiced her frustration before ruling herself out of an investment. With Sarah and Nick taking the side of the other Dragons, Touker was the entrepreneurs last hope of an investment. Claiming to wipe the slate clean, Touker presented the seaweed company with an offer, much to the Dragons surprise. With an offer of all the money but a 50 per cent stake in the business, the offer was unsurprisingly refused, leaving the entrepreneurs with a red face and the Dragons with a bad taste in their mouths.