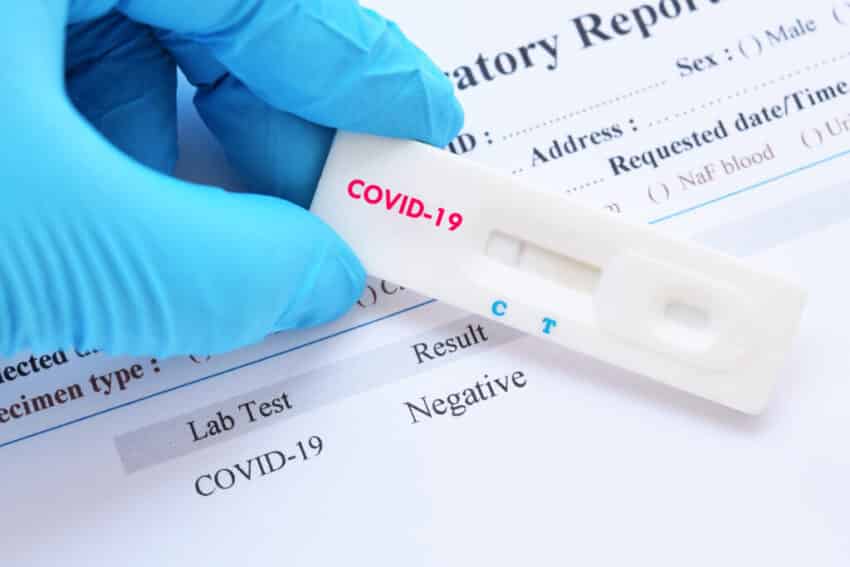 Workplace Covid testing is being offered to more companies in England, for staff who cannot work from home during lockdown, the government says.

Businesses with more than 50 employees are now able to access lateral flow tests, which can produce results in less than 30 minutes.

Previously only firms with more than 250 staff qualified for testing.

Health Secretary Matt Hancock urged businesses and employees to take up the offer to “stop this virus spreading”.

“When you consider that around one in three people have the virus without symptoms and could potentially infect people without even knowing it, it becomes clear why focusing testing on those without symptoms is so essential,” he said, adding that firms should regularly test staff.

The government said the wider criteria would “hugely” increase the number of different businesses that are able to sign up, with small and medium sized companies now able to take part.

A website has been launched for more businesses to register for the rapid testing programme.

The latest figures showed another 828 people in the UK have died within 28 days of a positive Covid test, and there were a further 18,262 cases.

As of Friday, the UK had given a first jab to nearly 11.5 million people.

Meanwhile, GPs in England will be paid an additional £10 by the NHS for every housebound patient they vaccinate against Covid-19.

As well as offering vaccinations at their practices, GPs have been visiting patients to provide jabs to often vulnerable people who cannot leave their homes.

The extra £10-per-visit funding is to recognise the extra staff time and complexity of vaccinating housebound people, NHS England said.

Business Secretary Kwasi Kwarteng said the expanded workplace testing regime would complement the rollout of Covid vaccines in the drive to “reopen the economy and recover our way of life as soon as it is safe to do so”.

And the British Chambers of Commerce said it would be “working hard to ensure that eligible businesses take up this opportunity”.

Dan Shears, GMB union’s health, safety and environment director, said: “These rapid tests are not a magic bullet, and it is vital that employers understand the limitations and take steps to address them.

“This is even more important when the most recent data shows hundreds of outbreaks in workplaces since the start of January,” he said.

Some 112 UK organisations have so far signed up to take part in workplace testing, with employees being tested across 500 sites, according to government figures.

This includes private sector organisations in the food, manufacturing, energy and retail sectors, and public sector employers such as job centres, transport networks, and the military.

NHS Test and Trace said that, as of 29 January, it had provided Transport for London (TfL) staff with 2,173 tests, identifying 28 positive cases who would have otherwise continued working alongside colleagues.

But a CBI survey found that 87% of UK businesses were not currently testing in the workplace, citing reasons such as the availability of NHS testing for individuals, unclear guidance, and the operational, logistical and/or regulatory complexity of offering testing.

Of those not carrying out workplace testing, 69% said they were not planning to offer testing in the next three months.

The CBI said the government had “a big role” to provide guidance and make it simple to introduce workplace testing.

According to the Department of Health, tests are currently being provided free to both public and private sector employers until at least 31 March, and the government’s support will be kept under review.

NHS Test and Trace will support organisations to deliver the asymptomatic testing by supplying the kits, and offering guidance and training for delivery.

The additional funding for GPs is retrospective and will apply to any vaccinations that have already been delivered to those who cannot leave their homes.

More than 1,000 GP services are part of the NHS vaccination programme, alongside over 250 hospital hubs and nearly 200 services run by high street pharmacies.

The UK’s devolved nations have the power to set their own coronavirus regulations.

Scotland, Wales and Northern Ireland each offer their own advice on testing.