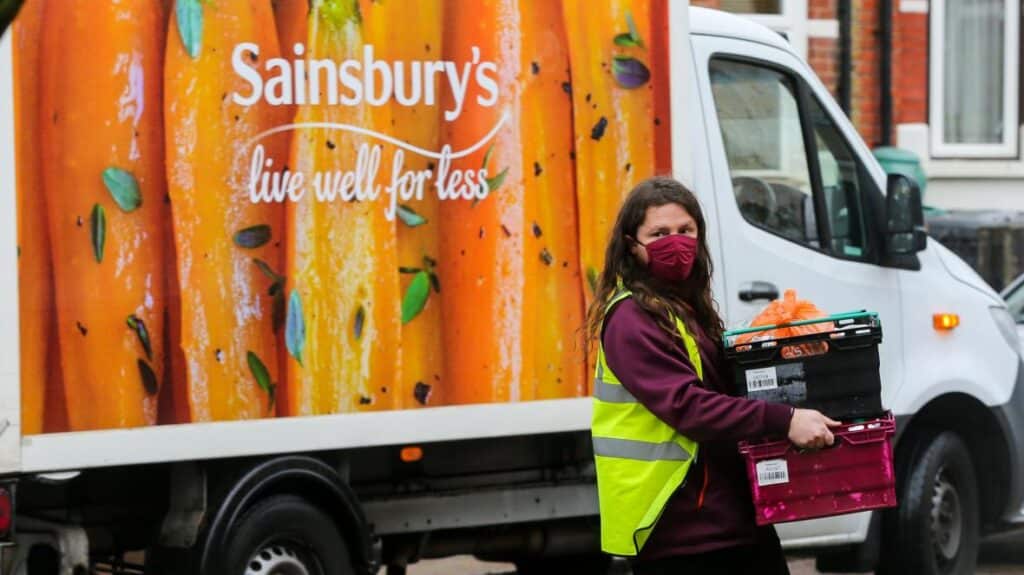 A last-minute rush for smaller turkeys after Christmas Covid rules were tightened and a boom in online grocery deliveries has boosted J Sainsbury’s profit expectations.

The supermarket group posted an 8.6 per cent rise in third-quarter sales while festive turnover in the nine weeks to January 2 was up by 9.3 per cent.

The chain is Britain’s second largest grocery retailer by market share and has most of its 600 supermarkets and 800 convenience stores in London and the southeast. It benefited from restrictions tightening in November and December, which meant that shoppers flocked to stock up on Christmas food, champagne and gifts while pubs, restaurants and other retailers were shut.

Simon Roberts, 49, who took over as chief executive in May, said: “Many people had to change their Christmas plans at the last minute and we sold smaller turkeys and more lamb and beef than normal.”

The surge in sales prompted Sainsbury’s to bring forward its trading update by a week to upgrade its guidance for underlying pre-tax profits to £330 million for the year to the end of March, more than a fifth higher than its previous guidance of £270 million.

This is 44 per cent lower than last year’s £586 million as Sainsbury’s has counted £290 million of costs related to Covid-19, which may rise further over the next couple of months if staff absence due to the coronavirus continues to rise.

Shares in Sainsbury’s, the most heavily shorted British retail business, rose by 16p, or 6.9 per cent, to 248½p.

The group’s grocery sales rose by 7.4 per cent in the third quarter while online orders soared by 128 per cent. It delivered 1.1 million online orders in the ten days before Christmas while total digital sales, which include Argos, account for 44 per cent of group sales.

Supermarkets have in the past struggled to make money out of online groceries because of the cost of deliveries but Mr Roberts said that Sainsbury’s online operation was profitable because the surge in demand has made it more efficient, as customers put more in their baskets with each order and vans were delivering to more homes in a smaller radius.

The group, which has scaled up its online capacity from 340,000 orders per week last January to 830,000, has also benefited from a quarter of customers choosing the click-and-collect service, which is significantly cheaper than delivery.

Argos sales were also 8.4 per cent higher as customers opted for its fast-track delivery service for Christmas presents. Sainsbury’s general merchandise sales fell by 5.4 per cent as the group stopped selling televisions and game consoles.

In a disclosure that will rankle high street fashion chains forced to close during the lockdown, Sainsbury’s also reported a 0.4 per cent rise in clothing sales while its Tu brand gained market share, a contrast with the heavy falls its fashion division had reported in previous quarters.

Last month Sainsbury’s followed its rivals Tesco and Morrisons and said it would hand back £410 million of business rates relief after rising anger that “lockdown winners” had profited from taxpayer support.

Clive Black, analyst at Shore Capital, the broker, said after Sainsbury’s trading update: “It is fair to say that with such a performance, not paying business rates would have been untenable”.

Although it was a Christmas like no other, the festive trading updates from retailers so far reveal that British households were still determined to celebrate, even if their gatherings were smaller and quieter than normal (Ashley Armstrong writes).

Aldi, Morrisons and Sainsbury’s have all reported a surge in sales in the run-up to Christmas as £11.7 billion was spent in supermarkets in December, a record year for the sector. With restaurants, bars and pubs shut across large swathes of the country due to the coronavirus, people had to stock up on alcohol and festive food to feast on at home.

The tough restrictions did not result in customers stockpiling necessities such as lavatory paper, as we saw in March — instead households were treating themselves to little luxuries to lift their mood, boosting sales of more expensive premium food ranges, while sales of champagne were between 50 and 60 per cent higher than last year.

The government’s eleventh-hour changes to Christmas gatherings also meant there was a last-minute dash for festive food for those who found themselves having to be cooks after all, while some families had already stocked their pantries to the brim in the hope that they would be enjoying a reunion after months of Covid-induced separation. All this means higher profits for the supermarkets.

The crisis has also accelerated the demand for online groceries. But noticeably, despite Morrisons and Sainsbury’s having very different approaches to online (with Morrisons partnering Ocado, Amazon and Deliveroo rather than having its own fleet of delivery vans), both grocers have said their online businesses are finally profitable.

If this proves to be a long-lasting trend, and customers continue to enjoy the convenience of not having to trawl around a store for their big weekly shop, it will remove one of the biggest headaches grocers have faced in recent years.