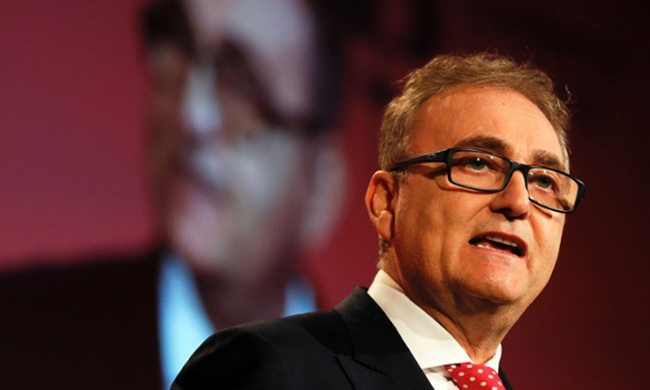 In the letter copied below below Longworth makes it clear what he believes British business needs from it’s main political parties in the run up to the May 7th election:

“In December, I wrote to you – and the other UK party leaders – with a call from business to act responsibly during the election campaign, and put the UK’s long-term success over political tactics and point-scoring.

All the major parties responded with a clear commitment to act in the interests of the economy and growth. With only a couple of weeks left in this campaign, it is impossible to remain silent in the face of mounting evidence to the contrary.

While there are some encouraging statements and positive ideas in manifestos, on the campaign trail it seems strategic vision and evidence-led policy announcements have been left on the bus. In their place we’ve had tactical headline-chasing and lazy assumptions; a reliance on populist statements, not economic common sense; and niche policy announcements, rather than a focus on the fundamentals. For example, issues like how the UK earns its way in the world go unaddressed.

Worryingly, the parties are also taking it in turns to propose new interventions in markets. These measures simply serve to side-step regulators and experts, rather than strengthening their hand.
Parties are competing to make ever more strident pledges to freeze taxes and ring-fence spending for the life of the next Parliament, without being able to see very far down the economic road ahead. No well-run business would tie its hands in this way.

And, dishearteningly, we also have policy proposals that, if enacted, would undermine entrepreneurship, aspiration and business growth. We have heard ideas to raid pension savings, create new levies on companies, and limit the tax relief available for genuine wealth creators and small investors, to name but a few.

Constraining those willing to take the risks needed to grow businesses demonstrates a lack of leadership. It is counter-productive and deeply troubling.

In the final few weeks of the campaign, I urge you to bring the focus back to long-term growth. Businesspeople want to see a clear and unapologetic vision for the UK’s future success in an ever more competitive and dangerous world. Our shared prosperity depends on it.