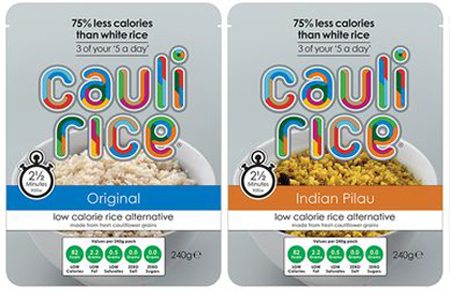 Cauli Rice is a low calorie and low GI Rice Replacement. It has 80 per cent fewer calories but with the same taste and satisfaction as ordinary white rice and is already being supported by industry experts. It is protected by a trademark, has had a successful patent search completed and is believed to be the first product of its kind.

Having completed their first round of funding in September 2014 Cauli Rice is now looking for second round funding to expand the business.

Since their first funding round Cauli Rice have:

2) Been awarded one of the biggest Government Grants in the UK, the Agri-tech Grant, because of their belief that Cauli Rice will significantly improve the cauliflower farming in the UK (cauliflower sales have declined by 60 per cent since the 80’s). This will allow us to own our production line rather than leasing from a manufacturer – giving us greater control and lower costs.

3) Received interest from Waitrose (200 stores), Sainsburys (300+ stores) and Holland and Barrett (200 physical stores & online which is equivalent to 400 stores) who are looking to launch Cauli Rice around May/June 2015.

Found and MD Gem Misa-Harris has 14 years experience in building and marketing FMCG brands. She spent 8 years in Unilever, as a Regional Brand Manager in Asia & Africa before working on one of the company’s biggest brands, (£1.1 billion revenue), as a global brand manager. She left to start food brand, Righteous Ltd, which was mentioned by Sir Allan Sugar in Series 8 of the Apprentice as an example of “An innovative new brand carving a niche in the market place”. Within 4 years, Righteous had products listed in over 1,000 UK supermarkets (including Tesco, Waitrose, Sainsburys, Ocado, Whole Foods Market, Booths etc.) and Major US Supermarkets (including Costco, Whole Foods Market & Albertsons).