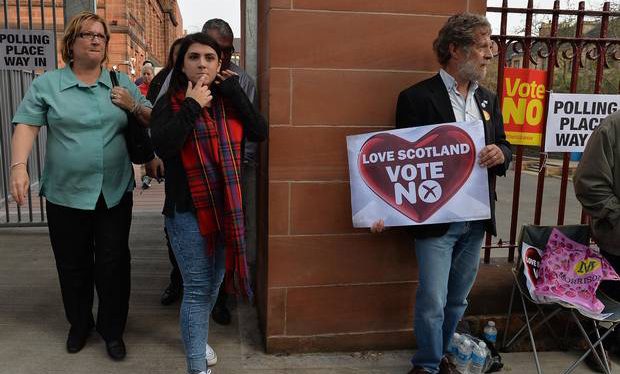 John Longworth, Director General of the British Chambers of commerce (BCC) said: “The people of Scotland have spoken. Their historic decision to remain part of the United Kingdom will be a relief to many businesspeople and a disappointment to others, but it was a decision for the Scottish people alone to make.

“The companies I speak to are clear that this cannot simply be the first in a series of referenda, until one side or the other gets the result that it wants. Business and investment prospects across the UK would be deeply hurt by a Quebec-style ‘neverendum’ – a lesson that politicians must heed.

“Yet businesspeople all across the UK have long known that the referendum would be the start, rather than the end, of a process of change. Businesses will now expect Westminster and Holyrood to reach a devolution settlement that is clear, fair to both sides, and swiftly executed.

“Businesses want greater devolution of power to be accompanied by greater devolution of finance, so that Scotland, and the rest of the United Kingdom, take responsibility for their respective tax and spending decisions. English, Welsh and Northern Irish businesses and taxpayers should not be subsidising support or incentives for their Scottish counterparts – nor the other way around.

“We have been through a period of disruption. Creative disruption can be galvanizing to countries, just as it is to businesses. It is up to the leaders of our nations now to make sure this is the result. Our United Kingdom now has the opportunity to define a future direction that stimulates growth and prosperity as never before – and for us together to make our way in the world, firmly on our own two feet.

Jeremy Cook, chief economist at the currency exchange company, World First, said: “It looks like it is all over for the Yes campaign and currency traders are back to backing the pound and pricing out the risk of a catastrophic split. Sterling has run higher towards the 1.28 level against the European single currency and up to 1.65 against the US dollar. We feel that there may be another twist in this to come but for now the City will wake to positive news for UK assets.”

“My immediate reaction is pleased and relieved,” said James Sproule, chief economist and director of policy at the Institute of Directors. “I didn’t think [independence] was going to be a good deal for the Scottish people or Scottish business.”

Sproule added that there was now work to be done to rebuild business confidence.

Martin Gilbert, chief executive of Aberdeen Asset Management, said: “UK investors will welcome a reduction in the uncertainty of recent months. Scotland has long been a world leader in business sectors such as oil and gas, whisky and investment and the task now is to grow the rest of the economy with the strong support of politicians of all parties.”

Diageo, Scotland’s biggest Scotch producer and maker of Johnnie Walker, said: “Now that the people of Scotland have voted to remain part of the UK, we will continue to focus on what matters for our business as the implications of further devolved powers become clearer. The future for [the Scotch whisky] sector will remain bright provided there is no further regulation or taxation on the industry.”

“There can be no doubt that many businesses will breathe a sigh of relief that the prospect of a contentious currency debate and prolonged economic negotiations have been avoided, and yet we know that significant changes are still on the cards,” said Simon Walker, director-general of the IoD.

“The focus must be on ensuring that any new powers are used to boost Scotland’s economic competitiveness, unleash enterprise and attract further investment.”

Scotland’s aerospace, defence and marine industry, which accounts for 10 per cent of the UK economy and employs some 40,000 people, has been particularly anxious about the prospect of Scottish independence. Many companies rely on UK government contracts which they feared could be in jeopardy should Scotland leave the union.

Paul Everitt, chief executive of defence trade organisation ADS, said: “The decision by the people of Scotland to continue our union offers a great opportunity to build a stronger and better balanced economy together.”

Lord Mayor of the City of London, Fiona Woolf said; ‘As a Scottish Lord Mayor, I understand the desire by some to “go their own way” as an independent country, but I am glad the majority of Scots have chosen to remain in the UK.”

Liz Cameron, chief executive of the Scottish Chambers of Commerce, said: ““We are now on a path which will provide additional devolved powers to the Scottish Parliament. We need clarity and detail on what specific powers will be transferred, and ensure these are delivered within the promised timescale.”
Telecom executives welcomed the vote given their fears that a split would cause costs to rise amid uncertainty over network separation and spectrum management.

Commenting on what the result will mean to the financial and currency markets,  Alan Wilde, Head of Fixed Income – Global, Baring Asset Management, said: “the big question is what happens now. In the financial markets there will be collective sigh of relief as a period of huge uncertainty has been avoided.  This will calm markets, which had become increasingly nervous in the last few weeks.

Sterling has taken the bulk of pressure and a recovery to $1.65 or so seems plausible though upside potential may be limited as sterling has actually been stronger than other major currencies such as the €uro and Yen as the US dollar has rallied hard.  For Gilts, which have outperformed US Treasury bonds, there could counter-intuitively be some downside with the Referendum out of the way: one consequence of a Yes vote was that Bank of England (BoE) Governor Carney was expected to go slowly tightening UK rates.  This outcome may now lead markets to focus back on growth and conclude that the UK economy needs some modest restraint and that the BoE will be ahead of the US Federal Open Market Committee raising official rates.

Once the dust has settled, attention will turn to the political consequences of such a long and divisive Referendum campaign.  Concessions by all major political parties to sweeten a No vote give more devolved powers to Scotland and greater latitude to control its own budget.  Already there are some Westminster MPs who are unhappy that such promises have been made and it is to be expected that this issue will be very sensitive the closer we get to the May 2015 UK General Election.”