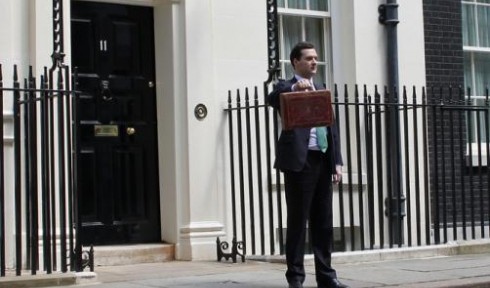 “A Budget for making things, not making things up,” the Chancellor said. To rebalance the economy away from debt-fuelled state spending and an unhealthy reliance on the City of London, to “a Britain carried aloft by the march of the workers”.
“There are some real pro-enterprise moves in this Budget that businesses will commend,” said David Frost, director general of the British Chambers of Commerce.
Small business was at the heart of Mr Osborne’s reforms. Pledges were made to chisel away at bureaucracy, with confirmation that consultation will begin into merging income tax and national insurance as well as the symbolic abolition of 43 “complex reliefs” that at a stroke tears 100 pages from Britain’s bloated tax code.
As billed, planning will be simplified and incentives for small company investment improved, as the Chancellor launched “Start-Up Britain”.
John Cridland, CBI Director-General, said: “This Budget will help businesses grow and create jobs. The Chancellor has made clear the UK is open for business. The extra 1p cut in corporation tax will help firms increase investment. Meanwhile, significant changes to entrepreneurs’ taxation will rightly focus much-needed support on businesses with growth potential.”
“Reductions in regulations on businesses and the promise of a faster planning system will provide relief to companies trying to take on staff and invest.
“The extra 1p cut in corporation tax will help firms increase investment. Meanwhile, significant changes to entrepreneurs’ taxation will rightly focus much-needed support on businesses with growth potential.
“Measures to increase the certainty of the tax treatment of foreign profits increase UK tax competitiveness. The agreed effective rate for overseas group financing will make the UK a more attractive location for multinational businesses.
The Key points related to business announced in the Budget were:
However, some felt that Chancellor had not gone far enough, Chris Lee, a partner in the Business Tax team at James Cowper said: “The Budget intends to help businesses and individuals, but for all George Osborne’s huffing and puffing it does little to disguise an increasingly gloomy economic picture, which sees growth falling to 1.7 per cent this year and high inflation.”
Despite a slower growing economy there are measures that individuals in the Thames Valley and on the South Coast will welcome. The increase in personal tax allowances to £8,105 by April 2012 will help many low and middle income families, and higher rate tax payers will be relieved to hear that the 50 per cent rate will not be made permanent.
Many entrepreneurs and business leaders like Charlie Mullins, founder and Managing Director of Pimlico Plumbers, were pleased with Mullins saying: “The Chancellor has responded to the challenges facing the army of entrepreneurs starting and running small and medium sized enterprises who hold the key to growing the economy.” – You can read more on the entrepreneurs opinion of the budget here.
If you want to read the budget in detail, you can download the Chancellor’s Red Book, with full information of the measures announced in the Budget, Below.
Download the Budget 2011 Red Book HERE