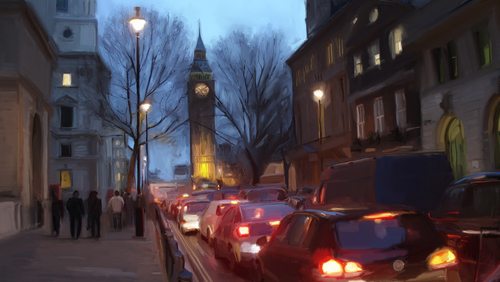 The study by LHD Car Supermarket asked 50 office workers to monitor their commuting time when driving to and from work.

They were then asked to subtract the time it would have taken them if there had been no cars on the road, leaving just the time spent in traffic.

According to the data the average worker spent 68 minutes per day stuck in congestion. This equates to 340 minutes per week and a staggering 272 hours per year.

Over the course of a working life, four decades, this adds up to a whopping 453.33 days, which is nearly one and a quarter years.

In fact, your average commuter could have voyaged to Mars and be on the return journey in the time spent stuck in traffic.

One man who took part in the study said: “I know that on a good day I can get to work in 20 minutes, however those instances are few and far between.

“Most days I can expect to spend at least an hour and a half in the car and for the majority of that time I’m moving very slowly.”

Another said: “Bad traffic can start the day poorly and can make an awful day at the office even worse. I swear, some days it would take me less time to walk to work.

“My morning and afternoon routines are meticulously planned out to avoid the worst traffic. I know I have to be in my car by 8:15 am to miss the congestion, if I’m just five minutes out it can add another 20 minutes to my journey time.”

A spokesperson for LHDCarSupermarket.com commented: “Sitting in traffic jams has to be one of the most annoying aspects of working life.

“The worst type of traffic is when you are trying to get home after a long day at the office. All you want to do is see your family and crash out on the sofa.

“Instead you are moving at a snail’s pace though mile after mile of congestion getting increasingly fed up at the benign conversation and poor music on the radio.

“At some point we’ve all convinced ourselves that we’ll start walking or cycling to work, but then quickly change our mind the following morning when the weather is bad.”