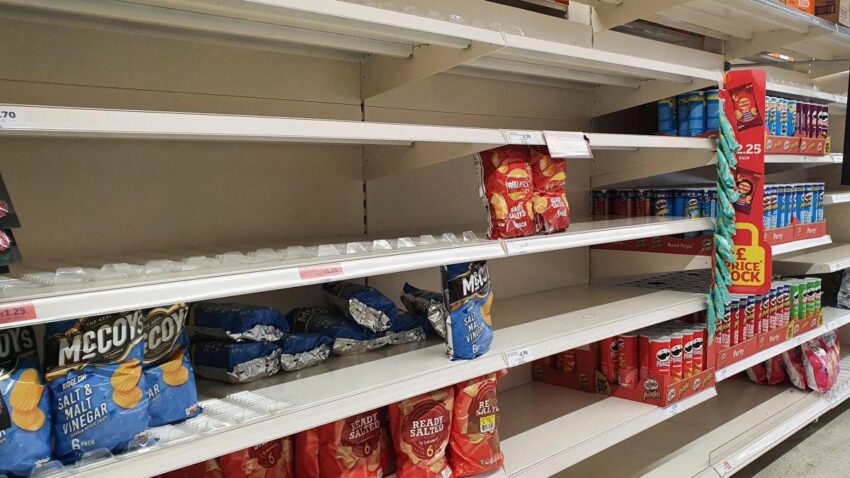 Britain’s crisp shortage has begun to ease but supplies on shelves remain low, with a quarter of shops still struggling to find stock.

Multipack crisps were ranked the lowest in availability, with 29 per cent of stores recorded as either having “none” or “low” according to the Office for National Statistics, which monitored supplies between November 19-22. The data was collected by Kantar Public in the course of 270 shop visits.

The 24 per cent total of shops where there were none or few of the products was down on the 33 per cent recorded a week earlier but crisps were still the hardest-to-find product on the shelves.

Paracetamol, ibuprofen, sparkling water and frozen turkeys were the next most affected items. There were also shortages of fresh pork and chicken, with 4 per cent and 2 per cent respectively of shops reporting zero availability. Of all the items monitored, 10 per cent of stores either had availability classified as “low” at 2 per cent, or “none” at 8 per cent, while 54 per cent had “high” levels of stock.

Walkers, the UK’s largest crisp maker, had to reduce production at the beginning of November after issues with an IT systems update. The company said that its factories were not likely to increase output to normal levels until the end of the month.

The group prioritised the production of popular flavours such as ready salted, cheese and onion and salt and vinegar but the shortage forced consumers to seek alternatives, which further depleted overall stocks. According to the ONS, the weighting for crisps within its basket of goods has risen this year to 3.12 from 2.64 last year.

Headline inflation stands at 4.2 per cent and the November figure will reflect the impact of the crisp shortage. However, rising energy prices, national insurance contributions and housing costs will also continue to add inflationary pressure to households.

The lack of staff has increased wage rates, the cost of which may be passed on to consumers.