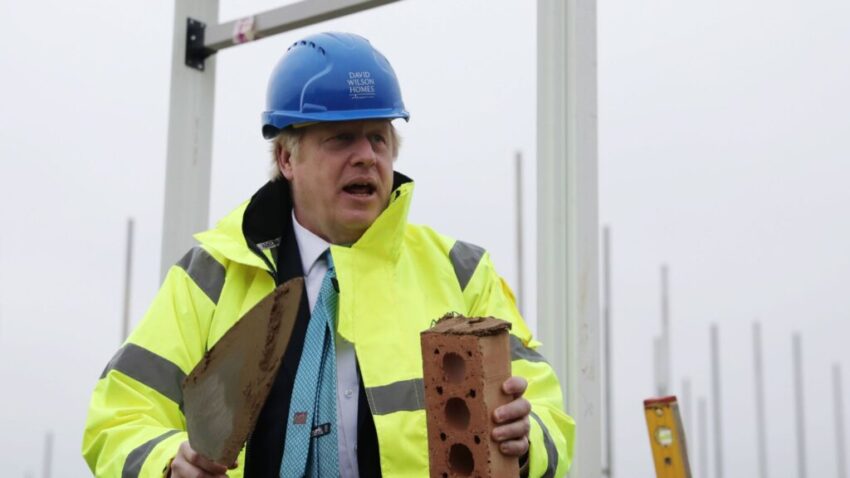 Boris Johnson will attempt to mark a new phase in the coronavirus response today by setting out plans for an “infrastructure revolution” to create jobs and stimulate an economic recovery.

The prime minister will invoke the 1930s “new deal” of former US President Franklin D Roosevelt as he delivers a major speech in the West Midlands town of Dudley this morning.

He will announce £5bn in capital investment to accelerate infrastructure projects this year, including hospital maintenance works, school building and improvements to the road and rail networks.

But a leading think tank warned tax rises could be needed to foot the bill and Labour said there should be more emphasis on jobs coming out of the COVID-19 pandemic, which has so far killed more than 43,000 people in the UK.

A national infrastructure strategy focused on the long-term plans for the country’s energy networks, transport infrastructure, flood defences and waste handling will be published in the autumn.

But the prime minister’s grand building plan has already been overshadowed by a spike in cases in Leicester, where the infection rate is three times higher than the next highest area, forcing a return to strict lockdown rules.

By comparing his approach to that of Roosevelt’s investment-based response to the Great Depression of the 1920s, Mr Johnson will seek to underline his rejection of any return of the austerity measures adopted after the 2008 crash.

According to Downing Street, the prime minister is expected to say: “It sounds positively Rooseveltian. It sounds like a new deal.

“All I can say is that if so, then that is how it is meant to sound and to be, because that is what the times demand.

“A government that is powerful and determined and that puts its arms around people at a time of crisis.”

How well is the coronavirus crisis being handled by those in power?

He will add: “This is a government that is wholly committed not just to defeating coronavirus but to using this crisis finally to tackle this country’s great unresolved challenges of the last three decades.

“To build the homes, to fix the NHS, to tackle the skills crisis, to mend the indefensible gap in opportunity and productivity and connectivity between the regions of the UK. To unite and level up.

circa 1942: Seated portrait of Franklin D. Roosevelt (1882-1945), president of the United States (1933-1945), who developed government reforms known as the New Deal, secured establishment of Securities and Exchange Commission (1934), and the Social Security system (1935). (Photo by Stock Montage/Getty Images)
Image:
Franklin D Roosevelt’s ‘new deal’ will be invoked
The total £5bn of capital investment set out by the prime minister will include:

The cash announced in the speech is also expected to include support for people at risk of losing their jobs, ahead of an update on the economy due to be delivered by the chancellor next week.

However, economists have warned there will still be a need for “tough choices” to be made if the government is to deliver on its election pledge to improve public services.

Torsten Bell, chief executive of the Resolution Foundation, said: “Governments will have to make decisions about tax rises if they are serious about making a big change in ending austerity and the public seeing differences in their public services day-to-day.

“What this crisis has done is make tough choices which were already there harder – the level of tax rises you need to achieve the kind of public services you want will have gone up, and the world has become more difficult, but that’s what a pandemic does.

“It’s a very expensive thing, it does lasting damage to our economy, but that’s the world we’re in, that’s what politicians will have to wrestle with, not just for the next six months but for years to come.”

Labour’s shadow chancellor Anneliese Dodds said: “Unemployment has climbed to its highest level in a generation, and our country is suffering the worst economic hit of all industrialised nations.

“But instead of the back-to-work budget our country needs focusing on one thing – jobs, jobs, jobs – the chancellor will only be providing an ‘update’ on the economy.

“We urgently need the Conservatives to abandon their “one-size-fits-all” approach to the economic support schemes, which will inevitably lead to additional unemployment.