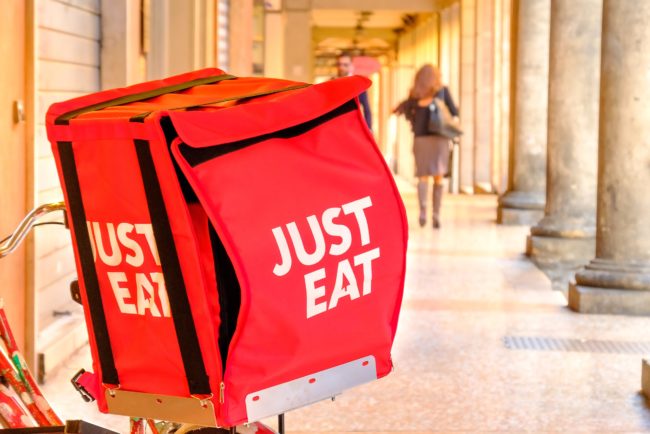 A takeover battle has broken out for Just Eat after a Dutch company gatecrashed the FTSE 100 group’s merger with Takeaway.com with a £4.9 billion hostile counterbid.

Prosus, which owns 22.3 per cent of Just Eat’s German rival Delivery Hero, offered 710p-a-share in cash in a bid that was swiftly rejected by the London-listed company this morning.

Shares in Just Eat surged 24 per cent to 733½p this morning amid speculation of further bids for the business.

The approach comes almost three months after Just Eat agreed to be bought by Takeway.com, of the Netherlands, in an all-share deal that would hand shareholders in the FTSE 100 group 52 per cent of the enlarged business.

Just Eat was founded in Copenhagen 18 years ago and in 2006 expanded into the UK, which is now its biggest market. It floated in London five years ago and is now based in the capital, with operations spanning 13 countries including Brazil, Canada and Australia.

Prosus is the Dutch unit of Naspers and was spun out of the South African technology conglomerate last month. It is a major investor in food delivery businesses and owns a 54.7 per cent stake in Brazil’s iFood, which also has a joint venture with Just Eat, and a 38.8 per cent shareholding in India’s Swiggy, as well as its investment in Delivery Hero.

The company’s offer for Just Eat is pitched at a 20 per cent premium to the 594p-a-share value of Takeaway.com’s deal for the British company at yesterday’s stock market close. It is Prosus’s third bid for Just Eat, having made two approaches in private of 670p and 700p, and is a hostile offer made directly to shareholders.

The FTSE 100 group said that Prosus’s latest bid “significantly undervalues Just Eat and its attractive assets and prospects both on a standalone basis and as part of the proposed recommended all-share combination with Takeaway.com”.

Just Eat said that it had “engaged fully with Prosus throughout this process, including providing access to Just Eat management and due diligence information”.

“Our plan is to support the Just Eat management team, with whom we have worked closely as joint investors in iFood, to deliver on the exciting opportunities to grow the business.”

Delivery Hero sold its German operations in December to Takeaway.com for €930 million in a mixture of cash and shares.

Ironically, one of the main reasons the Takeaway.com share price has fallen in recent weeks, thereby depressing the value of its offer for Just Eat, has been the sale last month by Delivery Hero of a big chunk of its resultant shareholding in Takeaway.com. This, in turn, has put downward pressure on the Just Eat shares.