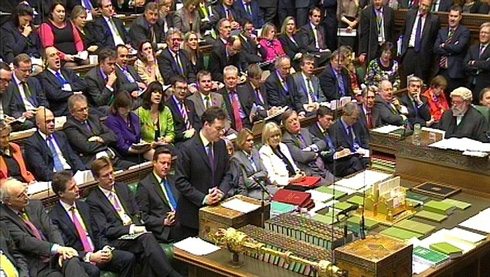 The chancellor told MPs that £20bn would initially be used for the National Loan Guarantee Scheme which is intended to reduce the cost of borrowing for small businesses.
As he attempted to free up lending to firms, Osborne admitted he “would not get every detail” right first time. “The important thing is to get credit flowing to small businesses,” Osborne said. Another £1bn will be made available through a business finance partnerships to invest in smaller businesses through non-bank channels.
The £40bn that might eventually be released for the National Loan Guarantee Scheme is being taken from the Bank of England, which was granted the guarantees by the Labour government to enable it to buy corporate bonds through its quantitative easing programme. However, the Bank of England did not embark upon buying bonds issued by companies in the way it bought government bonds, known as gilts. The QE programme is rising to £275bn.
The National Loan Guarantee Scheme will allow banks to benefit from the government’s top-notch triple A rated guarantee that, theoretically, should reduce the price they pay to borrow money on the markets – either directly from other banks or by issuing bonds. The banks are waiting to learn the size of any fee they will need to pay for the guarantee, which the chancellor said would reduce the cost of loans to small businesses by one percentage point. A company which had borrowed £5m at 7% would now be charged 6%, saving £50,000 a year.
Data published by the Bank of England on Tuesday showed that in October more loans were repaid by businesses than new ones taken out, leaving net lending negative for nine out of 12 months.
Shadow business secretary Chuka Umunna said: “While ministers’ efforts to boost access to finance for business have failed, it is becoming clear that plummeting confidence is now a major factor holding firms back from seeking finance, expanding and taking on extra workers. By cutting spending and raising taxes too far and too fast, the government has crushed business confidence, held back growth and stalled job creation, leaving Britain exposed before the full impact of the eurozone crisis.”
Business experts are concerned, however, that the government is wrong to focus on getting lending flowing.
Gary Stewart, director and founder of IT professional services company Xceed, said: “The Chancellor’s statement promises a great deal to ease credit and loosen the noose of a complex and ever-changing tax system for SMEs.
“Whilst it’s not entirely clear from where he’s drawing the funds to lessen these burdens, making it easier and cheaper to secure credit will go a long way to support the growth of UK SMEs.  SMEs and fast-growing companies need access to cash to fund continued growth and the current system is stifling the availability.
“Underwriting £40 billion worth of loans is all well and good but a process needs to be in place to ensure that SMEs can get credit quickly, without running a bureaucratic gauntlet to secure the funds that can support growth.
Michael Stephens, general manager for UK and Ireland at LifeSize said: “We welcome the fact that the Chancellor has finally recognised the enormousbenefit SMEs provide to the UK economy. The improvements in broadband funding and coverage will improve access to high quality communications infrastructure which is one of the keys to the success of SMEs and will bring the UK up to the level of other European counterparts.
“The new generation of unified communications equipment running across these networks can deliver an experience that can replace many of the reasons to travel and improve both customer and supplier experiences.  This technology also allows UK-based SMEs to seamlessly reach and service customers offshore and potentially improve the UK export figures in the process.
“SMEs should consider using some of the increased funding to improve the productivity and effiency of their organisations to sustain their livelihood in the long run.”