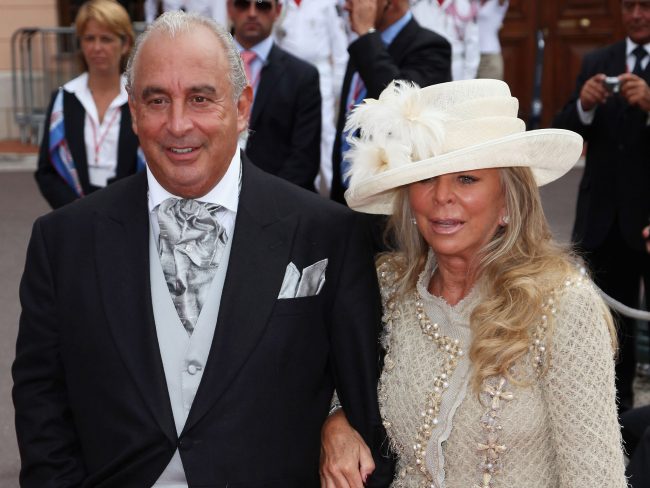 Sir Philip Green’s wife has received £50 million from the remains of her husband’s Arcadia retail empire while unsecured creditors will receive only 10p in the pound.

Lady Green, 71, who was recently pictured on board her family’s £100 million Lionheart superyacht near Saint- Tropez in the south of France, was a secured creditor to Topshop after providing the retailer’s warehouse in Daventry with an interest-free loan in 2019 during its first restructuring.

An administrators’ report detailing what has happened since the retailer went bust last November has revealed that £50 million was paid to Aldsworth Equity Limited, the Green family’s British Virgin Islands investment vehicle, after the £83 million sale of the Daventry depot to the developer Prologis. The warehouse is now being leased by Boohoo, the online fashion retailer.

Sir Philip, 69, once nicknamed the “king of the high street”, has not been seen in the UK since Arcadia Group, which included Topshop, Topman, Miss Selfridge, Burton, Wallis and Evans, collapsed after lockdowns dealt a final blow to the struggling business.

Unsecured creditors of Arcadia Group are owed a total of £1.8 billion but are expected to get back only 10p in the pound. The administrators are investigating how to realise the £1.3 million owed to creditors from a 53 per cent stake in the Fashion Retail Academy building in London. Sir Philip set up the academy in 2005 at a reception that saw then prime minister Tony Blair call the retail tycoon “a real visionary”.

Arcadia’s pension trust will receive £191.5 million in full after it was granted security over Topshop loans and a property on Tottenham Court Road in the capital, which has been sold. This has raised hopes that Arcadia pensioners may not have to rely on the Pension Protection Fund, which would mean savers only receiving 90 per cent of what they are owed.

Administrators also realised £745,000 from the sale of fixtures and fittings from Arcadia’s head office in central London, which included glass-fronted cocktail cabinets and trophy-style lamps by Green & Mingarelli Design, the interior design business set up by Lady Green.

Restructuring partners at Teneo have received £6.4 million for their work and expect £9 million in total.

Arcadia appointed administrators from Deloitte hours before a change to the insolvency laws that elevated the claims of HM Revenue & Customs above those of other unsecured creditors. As a result, HMRC will recoup only a fraction of the £44.2 million owed it by the group.