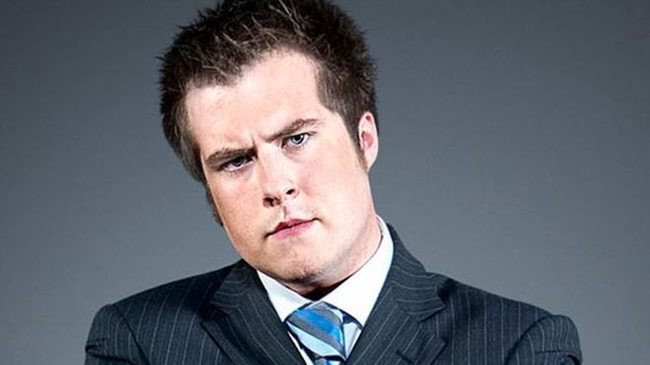 Baggs, who was known for his nickname ‘The Brand’, was the BBC show’s youngest ever contestant when he appeared on the sixth series in 2010 aged just 21.

He was found dead by police this morning after they were called to his flat in a seaside apartment block in the island’s capital Douglas at around 9am.

A police spokesman said Baggs’s death was ‘sudden and unexpected’ but there was nothing ‘to indicate that his death is criminally suspicious’.

Former contestant on The Apprentice Stuart Baggs has been found dead at his apartment on the Isle of Man, police confirmed today

Police said the death will be fully investigated on behalf of the Coroner.

The Plymouth-born entrepreneur, who also appeared on Channel 4 show Come Dine With Me, lived in the Isle of Man for most of his life and ran a telecommunications company.

Baggs was fired in the semi-final of the programme fronted by Lord Sugar, following the gruelling interviews, but was one of the show’s best remembered contestants.

He was known for his one liners and quips, which included ‘Everything I touch turns to sold’ and ‘I’m Stuart Baggs the brand’.

The series in which Baggs appeared appeared on went on to be won by former investment banker Stella English.

Lord Sugar was one of the first people to pay tribute to Baggs, describing the young businessman as one of the ‘stand-out characters’ from his show.

Taking to Twitter he wrote: ‘Terrible news Stuart Baggs has died. My sincere condolences to his family and friends. RIP – one of the stand out characters of The Apprentice.’

terrible news Stuart Baggs has died. My sincere condolances to his family and friends RIP one of the stand out characters of the apprentice

Ricky Martin, who won the show in 2012, took to Twitter this afternoon as he paid tribute, writing: ‘RIP to this member of The Apprentice Alumni. Stuart “The Brand” Baggs. My thoughts are with his family and friends.’

RIP to this member of The Apprentice Alumni. Stuart “The Brand” Baggs. My thoughts are with his family and friends 😔 pic.twitter.com/1tVLpS8Ovt — Ricky Martin (@RickyMartin247) July 30, 2015

Claude Littner, one of Lord Sugar’s most trusted aides who tore Stuart apart at the interview stage of the show joined others associated with the programme in sending his thoughts to Baggs friends and family.

So very sorry to hear of the passing of Stuart Baggs. He was a decent and ambitious young man. Really sad by his untimely death. RIP

Just yesterday, he had tweeted about the success of the launch, writing: ‘Making headlines with our new 4G LTE home broadband network’.

In an interview with local paper The Isle Of Man Examiner, which was published only yesterday, he excitedly spoke about the new home hub and said despite the fact that he was celebrating his birthday, he still intended to work his usual 18-hour day.

He said his new product would mean people would be able to connect to a 4G network and receive broadband in their homes without having to wait to be connected by an engineer in a move he claimed would ‘revolutionise’ how people used the internet on the Isle of Man.

‘We are an island, let’s pull together,’ he told the newspaper’s business section. Let us show some innovation. By God this has cost an absolute fortune but the winners will be the people of the Isle of Man.’

Speaking of his work ethic he added: ‘I work, as my hair will tell you, at least 18 hours a day. I sleep for four hours religiously, I would not have it any other way, like Margaret Thatcher.

‘But also I’m a geek, I make no excuse for it. I started this business as a geek.’