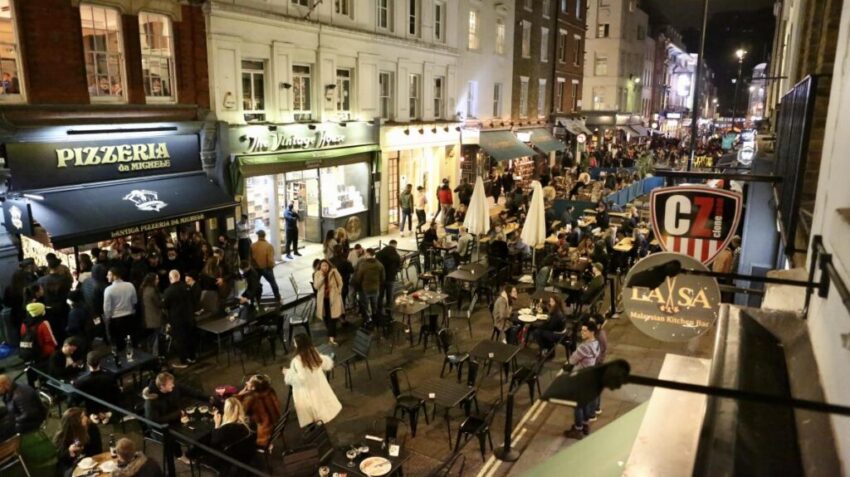 Police have warned they are “struggling” to enforce coronavirus rules after the 10pm curfew on pubs amid calls for the sale of alcohol in shops to be banned from 9pm.

John Apter, national chairman of the Police Federation, said police were having difficulty dispersing large crowds that gathered with only limited numbers of officers available.

“You might only have one or two people in a busy high street at 10pm when hundreds and hundreds of people are coming out on to the streets,” he told Today on BBC Radio 4.

“My colleagues will do the best they can to encourage and coerce people to move on but it is really difficult.

“All that you need is a hostile group that turns against those officers and the resources for that city centre are swallowed up dealing with that one incident.”

Andy Burnham, the mayor of Greater Manchester, called for an urgent review of the 10pm curfew as he warned it may be “doing more harm than good”.

He said the early closing time was leading to a rush to off-licences and creating an incentive for people to gather in each others’ homes, and suggested that the sale of alcohol in shops should be banned from 9pm.

It came after video circulated of crowds gathering in city centres on Saturday night, with people piling on to public transport and queueing outside shops to buy more alcohol.

Mr Burnham told Today: “I received reports that the supermarkets were absolutely packed out to the rafters with people gathering. I think there needs to be an urgent review of the emerging evidence from police forces across the country.

“That is the opposite of what our local restrictions here are trying to do. I don’t think this has been fully thought through,” he said.

Helen Whately, a health minister, said ministers were seeking to learn from experience but that the government had had to act in response to the rising infection rates.

“It is clearly early days. We have just changed this rule last week,” she told Today.

“We keep an open mind on what is the best way to go about it. The steps that we have taken, particularly with the 10pm curfew, is something that we have done in some places during the course of the summer where we saw localised outbreaks and hospitality being part of the picture.

“We are constantly learning and seeing what has the most impact but we clearly need to take a step because of what we have seen with the rates going up across the country.”