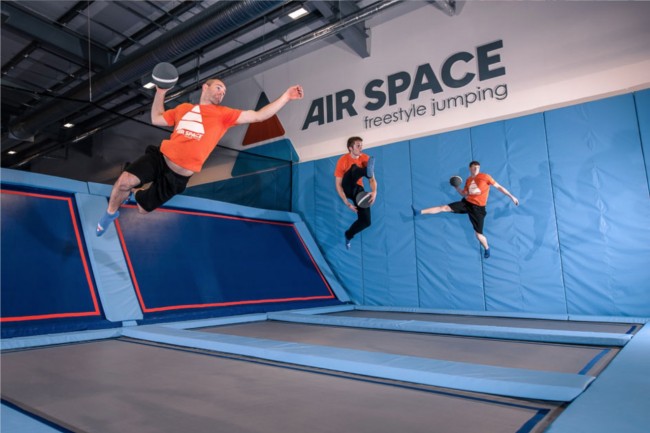 Following the success of its initial Glasgow centre and counting Ella Eyre and Union J as fans, Air Space has today announced plans to open two more giant urban playgrounds in the coming months, one in Wolverhampton this winter and Stevenage next year.

The ambitious plans will create over 130 local jobs and represents an impressive investment of nearly £3 million.

Each Air Space site consists of more than 100 interconnected trampolines that allow you to improvise your own solo moves in the main arena jumping from one trampoline to the next, or take part in team sports such as dodgeball, basketball and football.

Already a huge success in Glasgow, the new sites will be offering Freestyle Fitness, a new high intensity, low impact exercise class. Air Space has measured that attendees can burn up to 522 calories and achieve 40 per cent of daily steps in one session.

Go Ape and Air Space Co-Founder & Director Rebecca Mayhew says: “We have been delighted with the success of Air Space since launching last year.  At the time our Glasgow site was the largest of its kind in Europe, and at 50,000 sq. feet and cathedral like height, our Wolverhampton site will take the crown as the biggest trampoline park in Europe with lots to offer.”

“These are two great locations for us. The Bentley Bridge Retail Park in Wolverhampton is just two miles from the city centre, has excellent connections to the M6 and Birmingham, and is already a major shopping and leisure destination.”

The Stevenage Leisure Park is an entertainment venue in its own right with plenty of restaurants and great parking. It’s only 300 metres from Stevenage station and just off the M1 so we can serve people from a wide area.”

Air Space plans to continue to expand with the aim for 14 centres to open within the next two years.