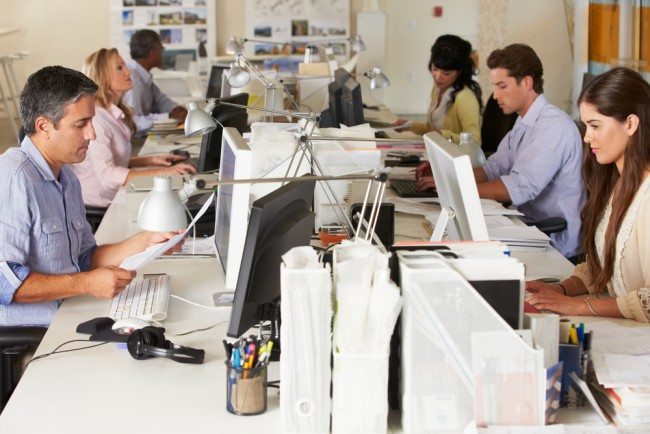 The majority of office workers will spend more time with their colleagues than their friends or family and new research by office space search engine Office Genie reveals that fellow team members’ habits really do grate over time.

Office Genie surveyed more than 1,000 UK office workers of all ages and professions, asking them to name the three biggest office faux pas committed by colleagues. Poor personal hygiene tops the list as the worst offence, with more than a third of workers naming this as the cardinal sin of office behaviour.

Nearly a quarter identified co-workers eating smelly food as their biggest office gripe, while more than a fifth find colleagues who repeatedly show up late maddening.

Many office workers are sick of office gossip, with 18 per cent of employees citing colleagues talking about each other as the worst trait they have to endure in their teammates. Discussing other peoples’ lives is more of a faux pas than talking too much about your own, with only 6 per cent of people saying that colleagues who talk about their private life too much as the biggest faux pas.

A further 18 per cent identified people who ignore ringing phones, leaving fellow colleagues to take calls, as the greatest offenders of social blunders in the work place.

Team mates who aren’t prepared to share the spotlight or the credit for a piece of work are a problem, with 17 per cent of people claiming they are fed up with glory hogging in the workplace. Boastful colleagues are also a bugbear for people in more ways than one, with a further 9 per cent of office workers having to endure co-workers bragging about how busy they are

Having a messy desk isn’t the way to make friends in the office, with 13 per cent naming the colleague whose workspace is littered with mounds of paper and discarded cups as a major source of irritation.

The age-old issue of tea and coffee etiquette has naturally made its way into the top ten office grievances, with a selfish attitude to drink making being the number one pet peeve for more than one in 10. Flirting with the boss is also a big no-no, with a further 11 per cent naming this as the worst office faux pas.

Ciaron Dunne, CEO at Office Genie, says: “Anyone who’s ever worked in an office will be able to identify with these irritating, and common, faux pas. And it’s likely we have a colleague who commits one or several of these on a daily basis.

“The chances are though that you’re also a culprit of one these office sins, and that the junk littering your desk, or your penchant for eating eggs over your morning emails, is silently driving the person next to you crazy. No one can be perfect, and certainly not for eight hours a day, but such considerations can make for a healthier, happier working environment.

“As minor and irrational as some of these might seem, office tensions can build into larger issues which become harder to address as time goes by.  A cathartic whinge is one thing, but if your neighbour’s neglect for personal hygiene is making your stomach turn, or if the colleague that refuses to be a team player is maddening, it might be something you need to address with them or a line manager.”