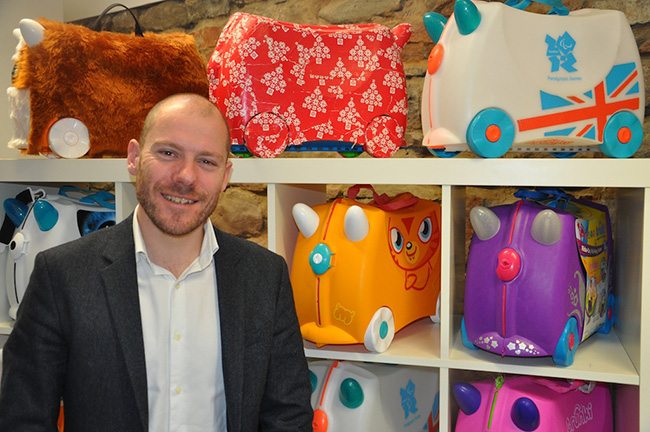 Rob Law left his Dragons’ Den pitch in 2006 dismayed after each of the Dragons ruled ‘I’m out’, after the strap on his prototype broke during a demonstration.

However he has gone on to sell two million of his children’s ride-on suitcases but he has been dealt a potentially crippling blow as judges ruled a rival product does not infringe on his design rights.

By 2011, 20 per cent of British three to six year olds owned one of the ride-on pull-along children’s cases, which can be designed with a number of different animal and insect motifs and today his company turns over £7million a year.

But trouble began to brew when Paul Beverley, MD of Hong Kong-based PMS International Limited, spotted a Trunki while on his travels in 2010.

PMS began marketing a rival product, the Kiddee Case, setting the scene for a legal battle over the design.

Appeal Court judges have now ruled that the ‘more rounded’ shape of the Kiddee Case – which comes in animal and insect designs – is ‘very different’ to the Trunki’s ‘sleek and stylised’ appearance.

Lord Justice Kitchin said: ‘The Kiddee Case is softer and more rounded and evocative of an insect with antennae or an animal with floppy ears.’

The Court’s decision that the Kiddee Case does not breach the Trunki’s community registered design rights is a disaster for Mr Law and his company, Magmatic Ltd, effectively opening up the European market to its discount competitor.

Bristol-based Mr Law was a student at Northumbria University when he was nominated as a finalist for the 1998 Materials Design Award.
Given the brief to produce ‘a design for luggage’, he was inspired to design a child’s bag, after visiting a toy shop.

The prototype, which he dubbed the ‘Rodeo’ – was awarded the top prize.

From there the Trunki became a success, with Law securing a contract with John Lewis, on the back of his appearance on Dragon’s Den.
Largely due to the popularity of the Trunki – which now sells in 97 countries – Magmatic won a top prize at the National Business Awards in 2012.

Law’s success came back to haunt him in court as PMS argued the ‘Rodeo’ design had been honoured publicly at the 1998 prize ceremony, long before the design rights were registered for the Trunki in 2003.

While no one disputed that the Trunki was an ‘innovative design’ – and it was accepted that the Kiddee Case was ‘inspired by’ its rival – PMS pointed to a photograph of Mr Law at the award ceremony and argued the Trunki’s design rights were invalidated by the publicity.

Ruling on the dispute, Lord Justice Kitchin said that the differences in the rival products’ shape, decoration, and colour meant that the possibility of parents being confused between them was slight.

Describing the insect version of the Kiddee Case, he said: ‘It looks like a ladybird and the handles on its forehead look like antennae.

‘Overall the shape conveys a completely different impression from that of the Trunki.’

Although there were ‘some similarities at a general level’, the judge, sitting with Lord Justice Moses and Lady Justice Black, said: ‘I think the impression conveyed to the informed user by the designs of the two versions of the Kiddee Case is very different from that of the Trunki.’

There were, he said ‘many significant differences’ between the profile of the two products as well as their colour and decoration.

Dani Kramer, partner and design attorney, Mathys & Squire: “As the inventor of the Trunki suitcase has discovered, the more successful a business or product is, the more likely it is to come under fire from imitators.

“By thinking strategically about how a design could be evolved, either by you or your competitors, and its market potential, you can predict the type of protection likely to be needed.

“Although not well-known, design registration is a surprisingly cost-effective tool in warding off copycats. It lasts up to 25 years with has a wide variety of applications, from product packaging and clothing to computer software interfaces and car parts, and can be used to stop others from replicating your products’ appearance.

“Registering a series of designs, each covering different variations, will afford more robust protection than for a single design, and the costs scale down the more that are filed, making it affordable even for the smallest businesses.

“Whilst it is almost impossible to cover every eventuality with regards to intellectual property, ensuring that you have the correct strategic level of protection in place will enable you to manage your competition in the market and ward off all but the most determined opportunists.”