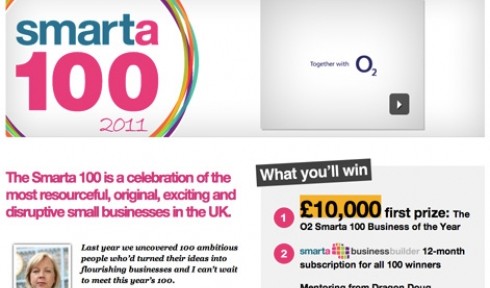 From the West Highlands to Westfield, The Smarta 100 celebrates the high-street heroes, market traders on a mission, eBay entrepreneurs, budding Bransons, the innovators ploughing new furrows in staid industries, the recession-busters shunning the doom and gloom, the web wonders, the teenpreneurs, mumpreneurs, olderpreneurs, the emerging big businesses of tomorrow and those small businesses just worth shouting about!
Last year’s winners have gone on to partner with the likes of LinkedIn (Huddle) and Lastminute.com (PrivateFly). The overall winner Highland Wifi even had its achievement acknowledged in the Scottish Parliament!
This year’s Smarta 100 won’t just get their hands on money-can’t-buy publicity but some fantastic prizes too, including a £10,000 first prize. Up for grabs are:
The Smarta 100 will be selected by a heavyweight entrepreneurial judging panel including King of Shaves’ Will King, Bebo founder Michael Birch, PR guru Lynne Franks, TV’s Sarah Beeny, creator of MySingleFriend.com and Tepilo.com and Simon Devonshire, General Manager of SMB for O2 and co-founder of social enterprise, One Water.
The overall winner will then be voted for by the public and announced at the awards ceremony at  Indigo2, London, alongside special awards for best of use of technology, resources, marketing, people and ethics.
Simon Devonshire, General Manager, SMB for O2, said: “The Smarta 100 Awards are particularly exciting as they will unearth and champion the successful small businesses and entrepreneurs currently operating in the UK, not based on how much money they make, but on how remarkable they are. I’m a fervent supporter of entrepreneurial activity as I believe it is a force for economic and social good and needs to be encouraged and praised, which is exactly what this year’s Smarta 100 Awards will do.”
Smarta founder Shaa Wasmund added: “There are some amazing small businesses out there providing superior products, services and solutions to their more established counterparts and we’re determined to find them.
The Smarta 100 champions the achievements of those enterprising individuals who put their hearts and souls into their businesses – but it also looks to elevate them to the next level. We’re delighted to welcome O2 as headline partner of the Smarta 100 to help us do just that.”
Small business can enter the Smarta 100 or nominate others at: www.smarta.com/100