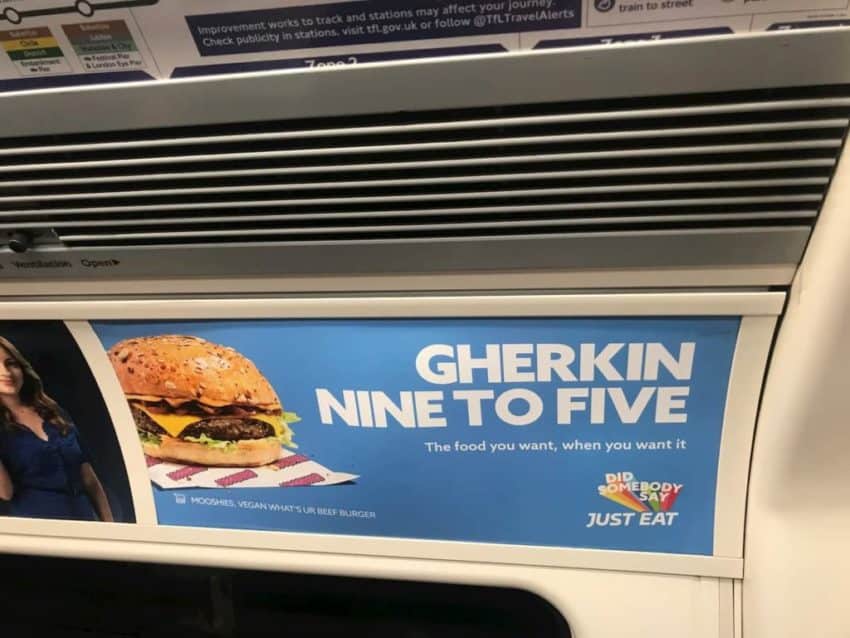 In February 2019 a ban on junk food advertising across the London public transport system was enforced in a move to curb child obesity.

However a year later, investigations by Learnbonds.com have revealed that the London Underground is carrying adverts on junk food through delivery firms.

When the ban was rolled out, London authorities targeted means food and drink brands, restaurants, takeaways and delivery services to promote healthier products. The ban came after research determined that 82 percent of London residents supported the junk food advert ban, which was also backed by public health experts. It covers food and nonalcoholic drinks that are high in fat, sugar, and salt, commonly known as HFSS products.

A section of the TFL financial report for the 2018/19 period highlighting the reason behind the junk food advert ban. The ban enacted to promote healthy living after alarming child obesity cases in London.

On Wednesday 4, 2020, Learnbonds.com staff took photos of junk food adverts from delivery service providers like Uber Eats and Just Eat across the London Underground. The adverts are displaying a range of junk foods like burgers from KFC. Other hundreds of adverts with similar products are displayed across the tube. 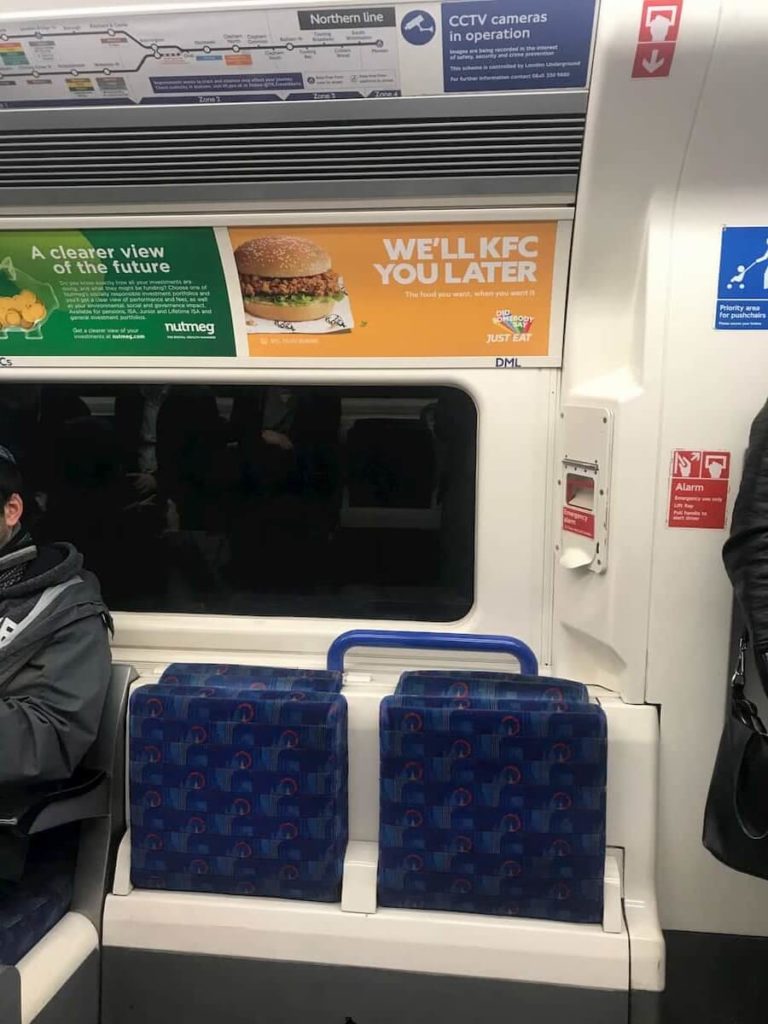 It is not clear how the adverts were approved by the TFL considering the strict approval guidelines.

According to the advert guidelines, before any food products are advertised on the Transport For London systems, there should be enough proof the product is not HFSS, or that an advertisement is not promoting HFSS products, or that there are exceptional grounds.

HFSS products are food and soft drink products that are high in fat, salt or sugar as identified using nutrient profiling.

A burger advert in the London Tube from Just Eat. The adverts contravene TFL’s guidelines on HFSS foods.

TLF alongside the Mayor of London has been flip-flopping ever since the new regulations came into place.

For example at one point, officials tweaked the guidelines where a “bucket” of KFC’ was promoted on the tube but an advert from Farmdrop was rejected.

Farmdrop is a UK firm that delivers fresh produce across London. The advertisement for the online grocer was banned for including bacon, butter, and jam. Ironically, the guidelines released last year indicated that TFL had outlawed a mix of HFSS products yet the Farmdrop products do not fall under this category.

TfL also removed strawberries and cream from its own Wimbledon advert because it thought it would contravene the rules by promoting fatty food for children. 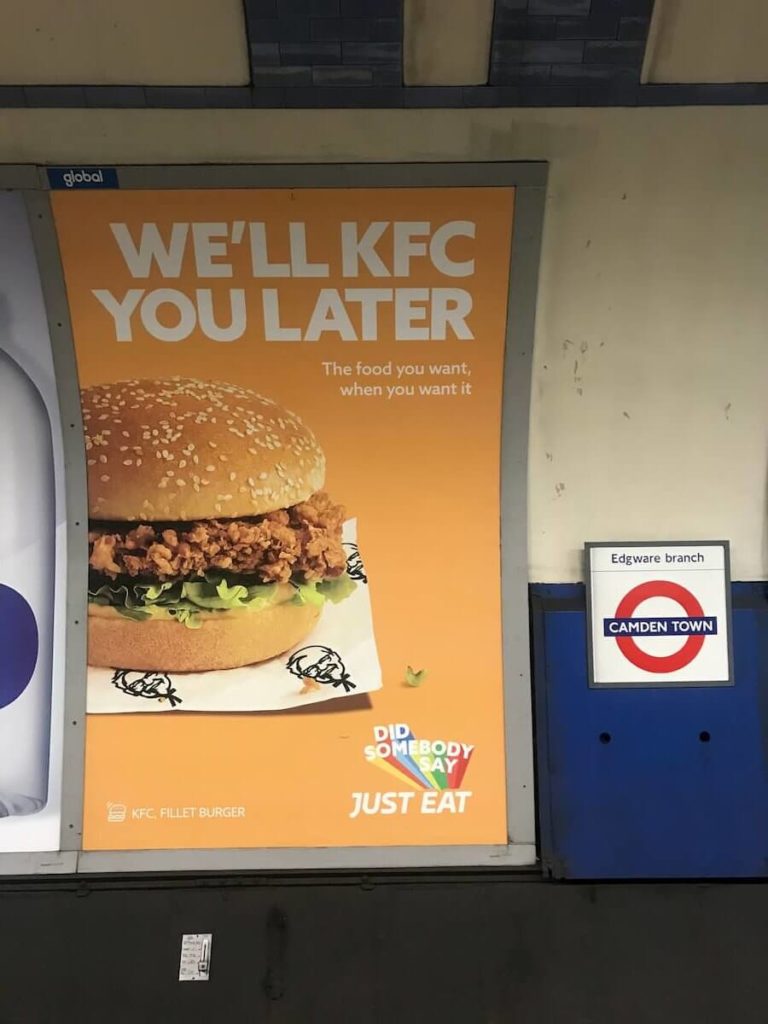 According to the TFL, Farmdrop failed to apply for an exception that would have allowed it to display the items, and instead chose to work with it to amend the advert.

Many argue that it was ironic for the TFL to ban daily foods like eggs and beacon yet platforms like KFC still carry adverts through the network. Interestingly, the ban on foods like doughnuts on the tube is ironical yet on the way to the underground, there are stalls selling fatty foods. The stalls have received approval from TFL.

Another KFC burger advert in the tube. The TFL had banned junk food ads in a bid to fight child obesity.
According to TFL advertising guidelines, some advertisers can seek an exemption because of “unintended consequences”, if the product is not aimed at children like olive oil. However, with the display of KFC burger ads, it is not clear why the advertiser was exempted since the food range has directed consequences on children.

Brands like Uber Eats can still advertise an unhealthy diet and lifestyle even if their adverts did not feature any of the prohibited food items specifically.

According to TFL, it will look at exemptions on a case by case basis if, for example, it was not the purpose of the ad to promote the HFSS product. Naturally, burgers are high in fat, beating logic why the TFL approved the ad.

It is worth noting that TFL did not ban brands, but the foods they produce. Despite the HFSS foods ban, brands like McDonald’s, Just Eat and Deliveroo can still advertise an unhealthy diet and lifestyle even if their adverts did not feature any of the prohibited food items specifically.

The lack of clarity on the junk food adverts might be a direct consequence of the entire ban guideline that was viewed as rushed by Mayor Sadi Khan’s critics. Many warned that the ban might not bring out the intended result because it was ‘confusing’.

Amid the controversies, TFL maintains that it has not “changed” the policy but it has “amended” some of the sections.