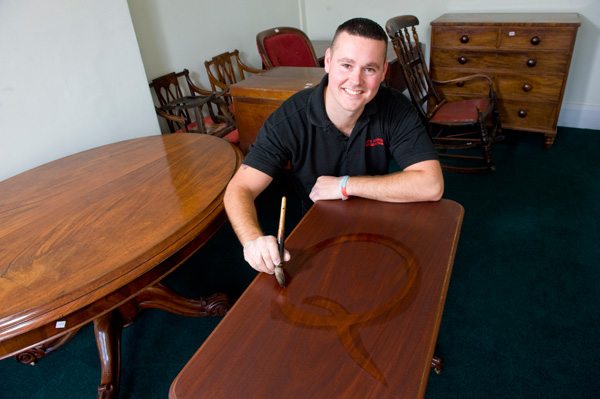 Craig, aged 29, from Chesterfield, was left devastated when he found himself unemployed, after being made redundant at the height of the recession.

He’d always had had a passion for antiques, and left school at 16 to start an antiques restoration apprenticeship. He was thrilled when this turned into a full-time job, and Craig spent the next ten years working his way up and was even chosen for an exciting project restoring World War One aeroplane propellers.

However at the age of 26, and just two weeks before his wedding, Craig was dealt a huge blow when he was made redundant.
Craig recalls: “Realising I had no job was the worst moment of my life. It was completely out of the blue. I started applying for other jobs straight away and would have taken anything to ensure I was earning money. But it was the middle of the recession and after applying for hundreds of jobs and hearing nothing back – I felt completely worthless.”

Six months later his wife suggested he use his skills to set up on his own and Craig approached The Prince’s Trust to see if they could help. Within a few weeks Craig signed up to take part on The Trust’s Enterprise programme which helps disadvantaged young people to set up in business.

After completing the course, Craig was thrilled when he was awarded a dedicated business mentor to help him launch Quality Antique Restoration – a business specialising in antique furniture restoration and french polishing.

Craig says: The Prince’s Trust was fantastic. I can’t explain how important their help and support was in helping me to get where I am today.
“I learnt so much about business planning and knowledge and for the first time in months I started to feel happier about my prospects. Having a business mentor was invaluable. He was there every step of the way to help and support me.”

Almost three years later, Craig’s business is a huge success. Business is booming and he has built up a trusted reputation with the local community and across Derbyshire.

Craig also volunteers as a speaker for The Prince’s Trust, inspiring other young budding entrepreneurs to turn their lives around. He is currently in the process of expanding the business where he will source, buy, restore and sell his own products.

I can’t thank The Prince’s Trust enough for their support. I was in a very dark place after I was made redundant but I’m now running a successful business doing something I love.