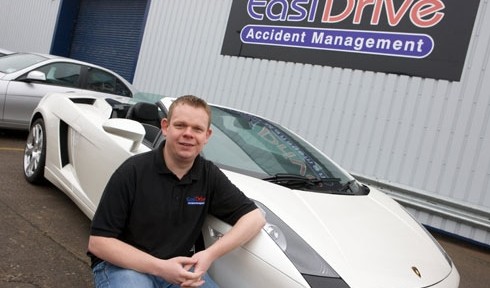 Manchester-based accident management company Easi-Drive not only experienced growth in all key metrics in 2009 but, despite the recession, has invested substantially in its future.
Committing £2m to larger, purpose-built premises with state-of-the-art systems and great working conditions has increased engagement among loyal staff while an expanded vehicle fleet to the value of £16m will provide the foundation for growth. It also has a community giving scheme, called WheelsforGood, which has pledged to donate in excess of £60,000 each year to good causes.
Established in 2001, Easi-drive has experienced huge organic growth over the last 12 months and has increased its workforce by over 40% to cope with the increasing demand. The now 120 strong team has helped the company gain recognition from a variety of business and trade awards over the last year, including the Fast Track 100 2009 list and as a finalist in the Manchester Evening News Business of the Year Awards 2009.
On being shortlisted in the National Business Awards, Easi-drive founder Simon Bellamy said: “It is testament to the hard work of the excellent team of people here. Customer service runs through our veins at Easi-Drive and we work tirelessly to ensure that we deliver the best service we can to all our customers.”
Commenting on its selection as a finalist for the Santander SME of the Year Award, Chair of Judges Phil Forrest said: “Providing an empathetic service which recognises the needs of those who are in the post accident situation has enabled the company to develop a range of services and deliver them in a way which minimises stress to all stakeholders. It has built a successful business that is enjoying substantial growth and profitability.”
Along with its fellow finalists, Easi-Drive will present live to a panel of specialist judges in September at The Gherkin in the City of London. This year’s judging panel, chosen to focus on key aspects of the criteria, include Martin Lyne, Director for small and medium business Orange, UK/Everything Everywhere; Surinder Arora, Chairman of Arora Holdings Limited; Stuart Hough, Sales Director, SME at British Gas Business; Steve Pateman, Head of UK Corporate and Commercial Banking; and Jack Perry, Former CEO of Scottish Enterprise.
Over 150 of the UK’s most innovative and resilient public and private sector businesses have been announced as finalists in the National Business Awards in partnership with Orange this year. Organisations shortlisted range from the well-known – Unilever, Camelot, Marks & Spencer, American Express, Coca Cola, The Co-Operative Group and Kwik Fit – through to the rising stars of Easi-Drive Ella’s Kitchen, Freesat, Coffee Nation, Naked Wines, and Cheapflights.
Announcing The Santander Small to Medium Sized Business of the Year finalists, Steve Pateman, Head of Corporate and Commercial Banking at Santander said: “2010 is proving to be another tough year for UK SMEs, and this makes it even more important to celebrate their success. Santander is committed to increasing the support we provide to SMEs, which are the lifeblood of the UK economy and have a key role to play in the future economic recovery. It is vital that successful SMEs such as these are recognised, as they highlight the benefits and rewards of running your own business, and their success will encourage future entrepreneurs.”
The 2010 finalists for The Santander Small to Medium Sized Business of the Year are as follows:
All winners will be announced at the National Business Awards Ceremony on the 9th November, hosted by BBC News Presenter Huw Edwards, at the Grosvenor House Hotel in London.
Visit www.nationalbusinessawards.co.uk for further information or to book a table.