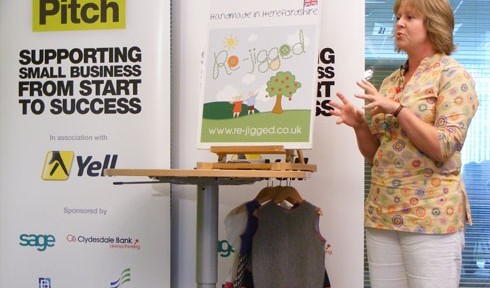 Carol Powell, founder of Re-jigged, claimed the title at The Pitch 2010 after presenting to business experts including William Chase, the creator of Tyrrells Crisps, a brand he sold in 2008 for £40m and Ross Elder, co-founder of Holiday Lettings which was last month sold to Trip Advisor.
The small company, based on a farm in Herefordshire, turns old shirts, jumpers and even bed sheets into unique and high-end kids fashion items. Powell’s inspiration for the idea came after she needed to re-line her daughter’s coat and found an old shirt that perfectly fitted the job.
When contacted about her victory, the entrepreneur said: “I’m in a branch of Ikea and my husband’s going to kill me but I’m so excited I’m going to jump on a bed!”
The Judges deliberate
Powell, who was also judged at Birmingham Science Park Aston by A Suits That Fits co-founder Warren Bennett and Mark Payton, fund principal at the Mercia Technology Seed Fund, will join the winners of four other regional heats at the November grand final of The Pitch 2010, organised by BusinessZone.co.uk in association with Yell and sponsored by Sage. A sixth finalists will be decided by a public vote to be launched in September.
The overall winner will receive business support prizes worth £50,000 including one-on-one mentoring from former Dragons’ Den judge Doug Richard.
Tyrrells Crips founder William Chase, who is now running Chase Vodka, said: “The competition was tough but Re-jigged is a company with the legs to become a highly desirable brand. I believe Carol will benefit greatly from winning the overall prize.”
Warren Bennett, co-founder of A Suit That Fits, added: “I love Re-Jigged’s designs and with the right management and advice it could definitely become a one million pound turnover business.”
Also pitching in the Midlands heat of The Pitch 2010 were Hadrian Garner, managing director of One Chem; Edwin Broni-Mensah, founder of Give Me Tap and Lee Blake and Stan Karpenco from Nationwide Learning, part of the Made by Young People network.
Business Matters is the official media partner of The Pitch 2010