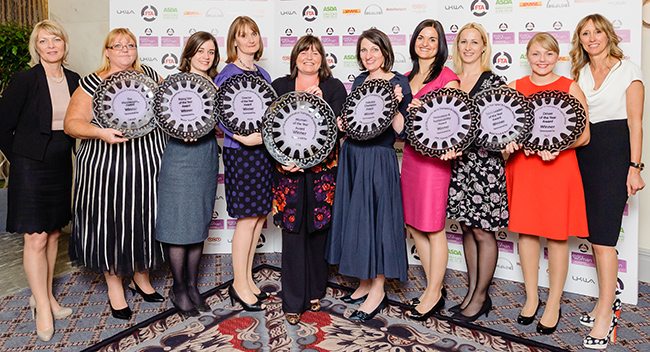 The FDM everywoman in Technology Awards, in association with Intellect, were launched in 2011 to celebrate those that are spearheading technology in business, whether as founders of start-ups, leaders within global corporate organisations, or young high-fliers who are the IT stars of the future.

The Awards are once again supported by FDM Group, which, driven by Chief Operating Officer Sheila Flavell shares everywoman’s vision of raising the profile of women pursuing a career in technology and highlighting the diverse career options IT offers, ranging from programming, gaming and data processing, to support services such as marketing and finance.

Technology also offers impressive salaries, opportunities for travel, many options for freelance and self-employment as well as flexible working conditions. However, despite this, statistics show that women are being deterred from pursuing a career in technology, and this trend begins in the classroom.

The FDM everywoman in Technology Awards aim to reverse this decline by uncovering role models working within technology, women who will inspire others to consider a career in IT.

The FDM everywoman in Technology Awards are free to enter and the 2014 categories include:

Maxine Benson MBE, co-founder of everywoman comments: “Technology offers such a wide range of career opportunities across every industry sector and yet relatively few women are pursuing a career in IT. With just 13% of all STEM jobs in the UK being occupied by women, these Awards seek to address this imbalance. Over the past three years we have uncovered dozens of women who are shining in IT and enjoying challenging, fulfilling and financially rewarding careers and we look forward to unearthing more inspirational and incredibly talented women this year and celebrating their achievements within technology.”

Sheila Flavell, Chief Operating Officer and Founder Director of Title Sponsor FDM Group states, “”We are once again delighted to be sponsoring the FDM everywoman in Technology Awards. The Awards are a fantastic platform to raise the profile of women in technology by showcasing and celebrating the efforts and successes of the many high-calibre women in the industry. Like everywoman, FDM is fully committed to helping more women further their careers and break through the ‘glass ceiling’. At FDM, we are dedicated to supporting our female workforce and it is the aim of our global Women in IT campaign to encourage more women to see IT as a long-lasting and rewarding career that they can excel in.”

Julian David, Director General of Intellect adds: “We are delighted to support the 2014 FDM everywoman in Technology Awards. One of the biggest challenges for the UK tech sector is attracting appropriately skilled employees. We need a greater representation of the working population to join UK tech companies and help support the continued growth of the sector. In particular, we need to work hard to attract smart, skilled women who are not currently attracted to the sector and communicate the career opportunities in tech that are open to all. Tech UK must remain focused on attracting great women to the sector, retaining them and helping them to flourish and succeed.”

The Awards programme will culminate in a glittering Awards ceremony to be held on 19 March 2014. Following the 2013 sell out event the Awards Ceremony for 2014 will be held at the Sheraton Park Lane.