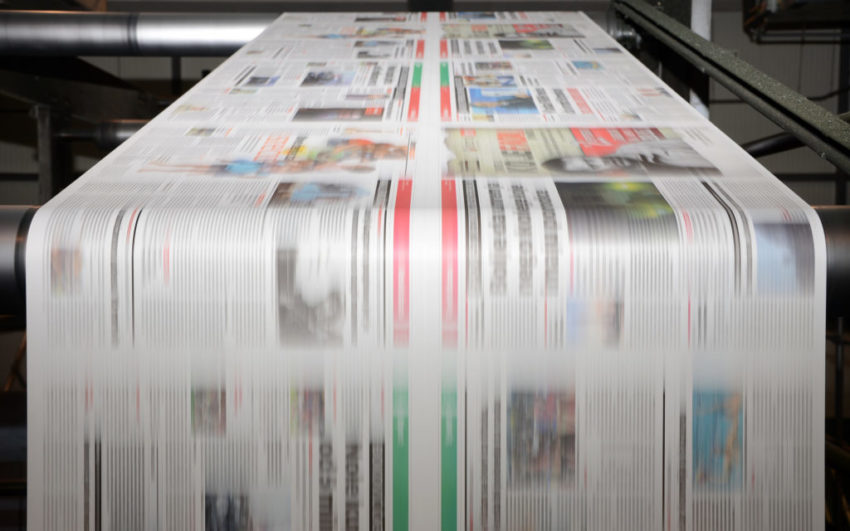 Every Thursday and Friday for as long as anyone can remember, the London Evening Standard’s ES magazine, Time Out, City AM and the Jewish Chronicle have rolled off the presses.

That was until the effects of Covid 19 hit hard

ES and City AM have been “paused”. Time Out is off the streets for now, and the Jewish Chronicle declared last week that it would soon go into liquidation, although editor Stephen Pollard said it would continue to be printed — for a while, at least.

Reports of the demise of the world’s oldest Jewish newspaper came after the Daily Mail Group asked staff to take temporary pay cuts, and Reach, publisher of the Mirror, Express and Daily Star, announced pay cuts and staff furloughs.

Print was not the only sector of the media cutting back. Channel 4 said it would slash its £660m programming budget by £150m and furlough almost 100 staff; chief executive Alex Mahon and director of programmes Ian Katz took 20% pay cuts and will not receive bonuses.

Channel 4 is seeking £95m of additional savings. Pact, the trade organisation for the independent TV production sector, warned that hundreds of companies faced hardship after the loss of commissions.

Last week’s gloomy announcements might seem surprising, given that the consumption of news and entertainment has skyrocketed under the lockdown. Most business and media websites report that their traffic is up by between 100% and 500%. Consumers are watching 30% more television — “Christmas levels”, according to veteran advertising executive Johnny Hornby. E-sports platforms and streaming giants, notably Netflix and Disney+, are booming.

The trouble is, many of the companies that produce the news and hit shows rely on advertising — and it has cratered. Enders Analysis estimates that newspaper and magazine advertising will be down by 30% this year — a reduction of £450m. The drop in TV advertising from April to June could be as much as 40%, double the slump during the 2008 financial crisis.

Newspapers and magazines have been hit hardest because, with commuters staying at home and 4,000 railway station and airport retailers shuttered, their distribution has been badly disrupted. Enders says a 50% circulation decline over two months will cost newspaper and magazine publishers £150m.

While working round the clock to report on the biggest story most will have ever covered, many editors and proprietors are now wondering whether it might also be their last. “We’re bang up against it as we work to serve the million people in our towns and villages who depend on us for accurate, reliable information,” said James Mitchinson, editorial director at the Yorkshire Post group of 30 newspapers, which employs 100 journalists.

He predicted that without “immediate” government support, many independent local and city titles that do not enjoy the protection of a rich parent company will publish for the last time either this month or the next.

“The measures we have taken to cut costs don’t make up for the reduction in ad revenue. We need grants and a change to the furlough scheme to pay journalists — key workers — to work, not down tools.”

Douglas McCabe, media analyst at Enders, agrees. He predicts that, without subsidies, as many as one in three journalists working for print titles could lose their jobs — 5,000 across the country. “It is a terrifying picture,” he said.

While broadcasting could recover, thanks to new demand from streamers, many publishing executives say the pandemic will be the tipping point for print titles — tipping them off a cliff.

The lockdown has sparked a huge digital uptick for newspapers and business focused sites. Traffic to the FT website has grown 250% year-on-year over the past month, and trial subscriptions have increased tenfold.

Here at Business Matters our website has grown by 315% year-on-year as business owners have been seeking answers to questions, and advice, about government support to the financial fallout to Covid 19.

“If you have a core, high-quality offering — it does not matter if it’s financial news, sports or health — and an attractive subscriber model, this could, ironically, be your time to fast-forward into a new future,” Lionel Barber past editor of the FT said.

Chairman of Capital Business Media, owners of Business Matters, Richard Alvin said: publishers would have to act innovatively to retain new readers once the pandemic eases and staying up-to-date no longer feels like a matter of life or death. “They need to be open to new revenue models, such as video, podcasting and sponsorship. The reader is our customer and if we do not given them what they want then they will drift off and with them and take our business with them”

Live-streaming of fashion shows, social media posts by designers and models, and e-commerce players such as Net-a-Porter publishing their own titles have eroded the authority — and the circulation — of glossy magazines. But Albert Read, managing director of Condé Nast Britain, publisher of Vogue and GQ, insisted that the glossies would not suffer the same fate as newspapers because ads “could come back quickly in the autumn, when we carry the most campaigns. Advertisers need publishers as much as publishers need advertisers. Going dark in a recession is not good for brands.”

While Condé Nast’s editors are ramping up online publishing — Wired’s web traffic has almost tripled — Read is confident that the market-leading glossies will prove durable. “Vogue, in printed form, is a luxury you want to hold,” he said. “It’s like picking up a new bottle of perfume.”

As Tina Brown looks to secure the future of her own publishing and events business, Women in the World, she has a piece of advice for hard-pressed publishers. “Don’t sack talented journalists — the people who are digging into the crisis now so brilliantly and reminding the world that journalism matters,” she said.

“Exploit the rise in home-working to save on office and studio costs. Look to make cuts to printing or the back office. Anything but staff. They are your future.”