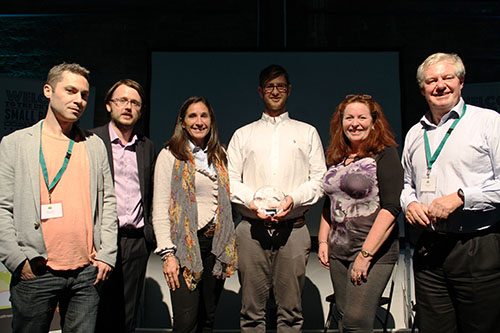 Kay was one of 46 business owners from across Britain who pitched during The Pitch Live, a 12-hour event in Bristol, the city where the competition was founded in 2008.

After taking to the stage in the semi-final, he joined four other finalists to pitch again before being chosen as the winner.

Kay wins a package of top class business support including 12 months of mentoring from Karen Darby, a day with the co-founder of successful brand Morphsuits, lessons in how to use PR and an intellectual property audit.

Dan Martin, founder of The Pitch, says: “The Pitch Live was phenomenal. It was our best event by far and the entrepreneurial energy in the room was massive!

“It was a tough competition but Arthur from Bio Bean is a worthy winner. His company is hugely innovative and it has big potential both financially and for benefiting the environment.

“With Karen Darby’s support and his other prizes, I’m sure Bio Bean will be a great success.”

Also observing the pitches were three investors – Ben Heald of Sift, Gonzalo Trujillo of Heron Capital Partners and Nick Wray and Martin Bowles of Horatio Investments – who selected seven entrepreneurs they are interested in supporting with a share of £275,000.

Other awards announced on the night included Gareth Bristow of Roc-Nut who was named the One to Watch winner. He received £1,000 worth of financial advice from ICAEW.

In addition, Gradvert was crowned the Social Media Award winner after receiving the most online votes during a competition in the lead-up to the event. The company won a trophy and products from Constant Contact.