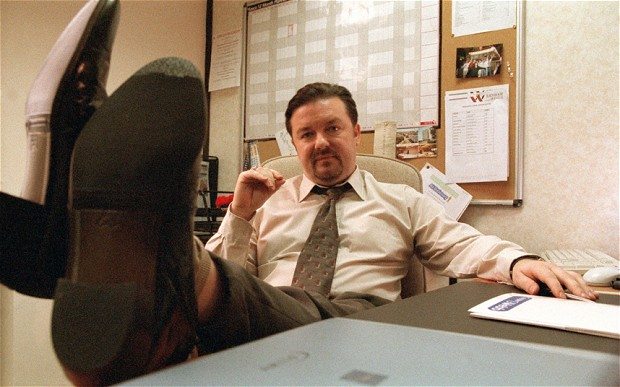 According to the ICM independent survey of workers 12 per cent of those taking part in the survey said their boss had displayed inappropriate behaviour in the last 12 months, mainly bad language, bullying, lying and breaching confidentially. The research suggests that British workers feel its time their bosses cleaned up their act.

10 per cent claimed that they suffer under real life ‘David Brent’ equivalents, with inappropriate behaviour rife amongst Britain’s workplaces, however many said that they had taken action as a result of the boss’s bad behaviour . However for 13 per cent this was  seeking another job and a further 4 per cent quit without a new job to go to.

The survey also revealed that badly behaved bosses can have a real and financial impact of profitability with employees less productive with 10 per cent of workers purposely disrupting the workplace or take ‘sickies’ as a result of badly behaved bosses.

British workplaces are rife with bad leader stereotypes like Hitler and Brent but good ones too, like Lord Sugar and David Cameron. However, British workers are less keen on having visionary bosses like Richard Branson, wanting instead those that are good at team building.

Men more often had a lower opinion of managers than women, despite male employees generally earning more and seen as having more opportunity in the workplace. Men are also more likely to raise issues directly with the boss and play the disruptive office prankster than their female colleagues, who appear to be more accepting of badly behaved bosses.

Bosses behave differently is different parts of country too. Scots and Londoners reported the highest number of impeccable and well behaved leaders, compared to South West England which had the lowest number behaving well and the highest considered bad or despicable.

John Telfer, managing director IBP, who commissioned the survey, said, “While not every boss in the country is bad there are clearly a good number of rotten apples as well as people that need more help to be a good boss. While it’s fun to make comparisons between badly behaved bosses and well known characters, the reality is less funny. There’s a financial cost that shouldn’t be ignored as workers become less productive. Measuring bosses behaviour and its impact on the bottom line is vital for companies looking to maintain profitability and growth in the future.

“British workers are often the source of valuable information and management need to gather these opinions and see what it tells them about how they treat their people and what they can do to make improvements,” Telfer continued.