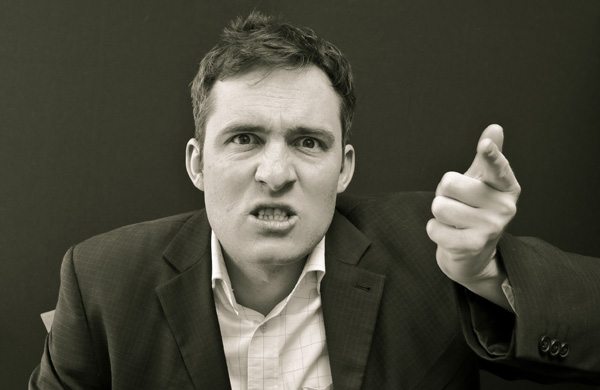 “The brain works more like a muscle than we thought,” Blake says. “So if you’re pinned in a corner for too long listening to someone being negative, you’re more likely to behave that way as well.”

Even worse, being exposed to too much complaining can actually make you dumb. Research shows that exposure to 30 minutes or more of negativity–including viewing such material on TV–actually peels away neurons in the brain’s hippocampus. “That’s the part of your brain you need for problem solving,” he says. “Basically, it turns your brain to mush.”

But if you’re running a company, don’t you need to hear about anything that may have gone wrong? “There’s a big difference between bringing your attention to something that’s awry and a complaint,” Blake says. “Typically, people who are complaining don’t want a solution; they just want you to join in the indignity of the whole thing. You can almost hear brains clink when six people get together and start saying, ‘Isn’t it terrible?’ This will damage your brain even if you’re just passively listening. And if you try to change their behavior, you’ll become the target of the complaint.”

So, how do you defend yourself and your brain from all the negativity? Blake recommends the following tactics:

1. Get some distance
“My father was a chain smoker,” Blake confides. “I tried to change his habit, but it’s not easy to do that.” Blake knew secondhand smoke could damage his own lungs as well. “My only recourse was to distance myself.”

You should look at complaining the same way, he says. “The approach I’ve always taken with complaining is to think of it as the same as passive smoking.” Your brain will thank you if you get yourself away from the complainer, if you can.

“Try to get the person who’s complaining to take responsibility for a solution,” Blake says. “I typically respond to a complaint with, ‘What are you going to do about it?'” Many complainers walk away huffily at that point, because he hasn’t given them what they wanted, Blake reports. But some may actually try to solve the problem.

3. Shields up!
When you’re trapped listening to a complaint, you can use mental techniques to block out the griping and save your neurones. Blake favours one used by the late Spanish golfer Seve Ballesteros during a match against Jack Nicklaus–a match the crowd wanted Ballesteros to lose. “He was having difficulty handling the hostility of the crowd,” Blake says. “So he imagined a bell jar that no one could see descending from the sky to protect him.”

In America Major League Baseball pitchers can sometimes be seen mouthing “Shields on!” as they stride to the mound, he says. He adds that his own imaginary defense is “more like a Harry Potter invisibility cloak.”

A related strategy is to mentally retreat to your imagined favorite spot, someplace you’d go if you could wave a magic wand. “For me, it was a ribbon of beautiful white sugary sand that extended out in a horseshoe shape from a private island,” Blake says. “I would take myself to my private retreat while people were ranting and raving. I could smile at them and nod in all the right places and meanwhile take myself for a walk on my private beach.”

Blake first saw the picture of the island in a magazine, and the image stuck with him. Eventually, he got a chance to try it for real. “It turned out the island was for rent, and it was the same one I’d seen,” he says. “So I rented it for a week. And I got to take that walk.”