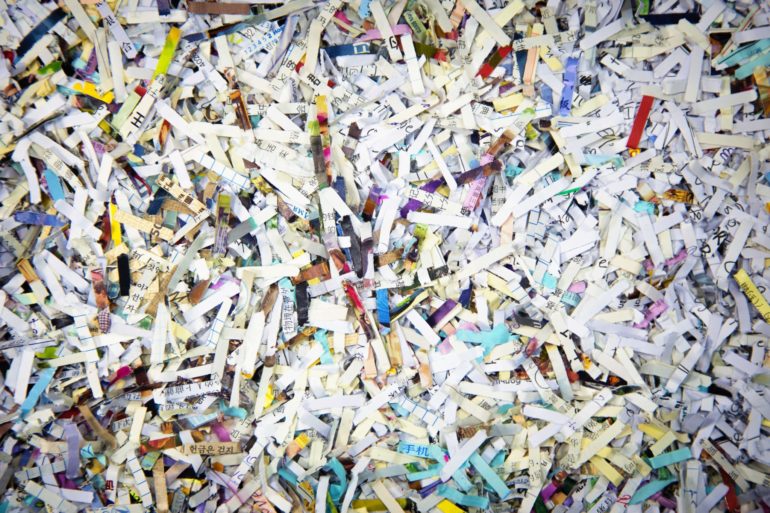 One third of businesses managers and owners don’t consider invoices to be sensitive enough to destroy, new research shows.

New research shows that only 67.5 per cent of businesses considered invoices to be worthy of secure destruction, highlighting that 32.5 per cent show little concern about confidential information between supplier and customer falling into the wrong hands.

Details regarding company structure and competitors also ranked relatively low in the survey. Both these issue are further examples of information that could be damaging to both company and clients if made public.

The secure disposal of ‘personal employee data’ was by far the most popular response, with 95.4 per cent of companies prioritising the confidential handling of staff data. This factor is likely to be highly influenced by the ever present threat of identity theft.

The survey also revealed that financial data, be it company-wide finances or employee wages, were also considered to be areas worthy of secure disposal, attracting 90.4 per cent and 88.6 per cent of the votes respectively.

These findings highlight that when it comes to securing company data, staff and finances take priority over client and competitor information in the minds of many managers.

Interestingly, men and women differed greatly on what they found most important.

Men cited competitor lists as being of the utmost importance, whereas women considered this area to be of least importance.

‘Securing wage information’ was the top answer from female respondents. Despite this answer receiving almost half of the female votes it was the area that received the least amount of male votes.

Jonathan Richardson, managing director at Russell Richardson, says: “Increasing cases of identity theft have meant that society is naturally much savvier about protecting their personal details. Data protection laws are stepping up a level, with the new General Data Protection Regulation set to replace the current DPA in May 2018, putting an even greater emphasis on online security.

“This strong focus on online security, however, makes it easy to forget the importance of protecting and securely disposing of paper copies of sensitive documents, no matter what their content. Because even if a document doesn’t appear to be important, in the wrong hands it can have potentially devastating results for companies and their client relationships.”