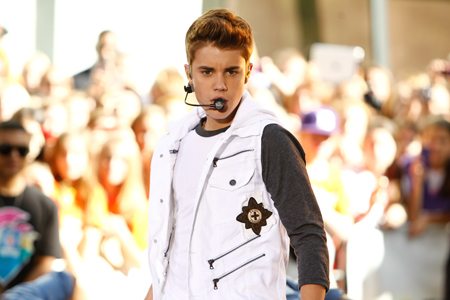 In June, the 18 year-old singer featured on the front cover of Forbes Magazine under the headline “Justin Bieber, Venture Capitalist”. Bieber is a superstar on a global scale, with a work ethic to match. Journalists and music industry insiders attest to the fact that behind the teenage swagger is a shrewd business mind, who is both innovative and determined to lead by example.

Since his debut album three years ago, Bieber has performed over 170 shows around the world and has sold more than 15 million albums, grossing in excess of $150 million. His biopic, Never Say Never, earned $100 million at the box office last year whilst his perfume, Someday, made $60 million in retail sales during its first six months. Those income streams helped earn Bieber an estimated $55 million during 2011, making him the richest teenager in entertainment with a personal fortune of $100 million.

But how do you equate celebrity and personal fortune with business acumen? Since the age of 15, Bieber has been building a business empire beyond his personal brand, investing his significant wealth, into amongst other things start-up technology companies. The decisions he and his advisors have taken have maximised his medium term earning potential whilst ensuring his future credibility and legacy. And therein lies 5 key lessons which every business owner or entrepreneur can learn from.

1. Know your audience
Understanding your target audience is critical to success. No business can afford to target everyone, meaning startups and SMEs can compete with corporates by targeting a niche market. Establish who your businesses biggest fans and natural allies are and keep them front of mind.

Bieber concentrates his full commercial attention on the lucrative teen female market. His first fragrance, Someday, was the best-selling perfume of 2011, and his One Less Lonely Girl brand of nail polishes sold over a million bottles in two months.

And remember, just because you are targeting a specific market does not mean that you have to seek to exclude anyone, rather it allows you to focus your brand message on the core audience who are most likely to buy from you.

2. Engage your audience
More impressive than Bieber’s financial clout, is his vast social media reach. He has over 21 million Twitter followers and 43 million Facebook fans, while his debut single ‘Baby’ is the most watched video in YouTube history with over 740 million views. In 2010 Twitter estimated that 3% of the company’s entire infrastructure was dedicated to handling Bieber-related tweets.

Lets accept that no business, big or small is likely to achieve global superstardom- the critical lesson however is the power of buzz and hype. ‘Word of mouth’ and increasingly ‘word of mouse’ are critical to building your brand. Sharing is the new metric and importantly for business it’s both low cost and highly effective.

Bieber understands that conversation and content is critical and has mastered the synergy between casual dialogue and promotion. Unlike many businesses on social media, he seeks to create super-fans; brand advocates who create a two-way conversation. Every time Bieber replies to a follower, he increases his influence, reaching not just his direct audience but expanding to incorporate his fans indirect circles too.

3. Manage your time wisely
In a world filled with daily distractions, it is essential that you remain disciplined and focussed. We all work differently but it is important to understand where your personal weakness lies. Your enemies could be email, social networking, unplanned telephone calls or catch up lunches. Be sure to plan time into your day or week where you manage those tasks which you are prone to over-committing time to.

Bieber is not only a prolific tweeter he is also one of the most photographed and interviewed individuals on the planet. He realised early on that no radio station or video music channel would play his songs on a regular rotation, so he committed himself to playing every station that came his way. No show is too big or too small and he uses each appearance effectively, demoing new material, playing covers and ensuring that he maximises his global exposure. It may be time consuming much in the same way as it is for your business to produce a regular blog or maintain your social media profiles, but Bieber’s consistent exposure was critical in expanding his reach.

The lesson is to establish those tasks that bring the most value and focus your attention and energy on maximising the benefits. It is also critical to your longer-term success to know now when and where you are at your most creative. You must be self aware enough to understand what environment stimulates your ‘best thinking’ and use that to develop your most important plans and strategies. Use your limited time to your advantage by understanding your strengths and weaknesses.

4. Build the right team
I expect that each and every person reading this article is saying “that’s all good and well but Justin Bieber is only successful because he’s paid good people to manage his interests”… and you’d be partially right but the same applies for most of us. Very few business owners or successful entrepreneurs make it on their own. Rather it’s about understanding our strengths and weaknesses and building teams around us that compensate for or compliment our own skill sets.

Bieber according to those closest to him is a workaholic and more savvy than your average Hollywood teen star. He has an acute understanding of technology and trends, keeping at the frontline of brand Bieber and that means he has his pulse on what’s hot and what’s not.

The rest is down to his manager Scott ‘Scooter’ Braun who actively engages with start-ups over potential investments or brand extensions which fit Biebers’ image and existing portfolio. Braun was the man who first proposed that Bieber invest in start-ups, knowing that it made sense for him to invest and therefore benefit from a product or service which he could promote to his global audience. Whilst the female teen audience is a lucrative market, the options were limited in terms of what Bieber could credibly lend his name too.

Having not just smart people but also the right people around you is critical. The decision from Biebers’ team was that there was one sector where Bieber had unrivalled existing access and credibility and which offered exceptional returns on investment; social media.

5. Develop multiple revenue streams
Business is at the mercy of innovation and technology. Some sectors such as core professional services, may be less exposed to change but the chances are your business, service or product will need to keep at the forefront of innovation or risk becoming out of date, unpopular or irrelevant.

Whilst over diversifying and spreading your resources is a risk to be aware of, more obvious is putting all your eggs in one basket. Most successful businesses understand early on the need to diversify and develop new revenue streams to mitigate the risk of market changes.

Careers rise and fall and Bieber’s foray into tech is far more than just a way of promoting his music- it’s the central strategy for how he plans to ensure teen fame converts into lasting credibility and financial success. He only invests in things he believes in and where he can bring value beyond his cash, such as music service Spotify and chat room service Tinychat.

What next for the Biebster?
Anyone who sees Bieber as a flash in the pan had better think twice. In October he launches a year-long, 5 continent, 125 date tour with a guaranteed pay packet worth $80 million.

The tour will be showcasing a more grown-up style to his music—part of the crucial step in making the transition from teen idol to music icon, which he balances as “trying to make music that’s a little bit more mature and that can appeal to all ages, and I’m not trying to lose my younger fans.”

You may not like his music or him for that matter but I’d advise against saying anything negative about him in front of your teenage daughter! So, I say hats off to the lad. He works hard, sets a good example and keeps on churning out an endless supply off birthday and Christmas gifts … and even the odd business lesson for the grown-ups!

Dean Williams is an acclaimed business coach and author of the book ‘Creating Grade A Business Relationships’. He works with blue chip companies and SMEs providing 121 executive coaching, team coaching, leadership seminars and alongside Olympic Gold Medalist Jason Gardener presents motivational speeches. He has been successful in helping suffering businesses by increasing their profitability and is a regular contributor to a range of business press including the Sunday Times.