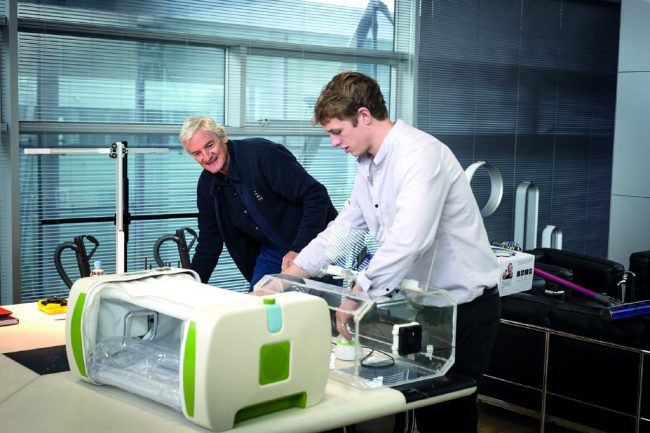 The mOm Incubator will provide a much-needed alternative to the bulky and costly incubators of today.  Relative to conventional incubators, the system collapses to a fraction of the size and is approximately 90% lighter, meaning it can be deployed easily anywhere in the world. In addition, the mOm Incubator will be around 5% of the cost of conventional incubators. With this new design, mOm aims to significantly reduce the 1 million infant deaths that occur every year due to premature birth (World Health Organisation).

mOm’s incubator was initially designed to provide incubation technology in refugee camps, and after extensive research on the challenges associated with the use of incubators in remote areas, the product has evolved into a high-quality, robust apparatus that can address both developed and developing market needs.

The mOm Incubator, and its creator James Roberts, have already won a number of awards, including the 2014 Sir James Dyson award for innovation and the JC Gammon award for enterprise and entrepreneurship as part of the Royal Academy of Engineering. In addition, mOm received the £50,000 diamond award from MassChallenge UK, a leading global accelerator for early-stage entrepreneurs, for which Dr. Boger and Lord Verjee are both advisors. The company is currently headquartered out of their UK office in London.

James Roberts, Founder & CEO, said: “It is still mind blowing for me to see my project, which was originally conceived in my final year of University, go on to become a reality and secure funding from a great team of investors. This is just the beginning, and we are working hard to bring the product to market and ensure it is able to have widespread impact in helping to reduce premature deaths.”

Dr. Alan Davies, the former Chief Medical Officer of GE Healthcare, and a member of mOm’s advisory board, said: “I have previously worked as a paediatrician in Newborn and Neonatal Intensive Care in Australia, where I was extensively involved in newborn transport across long distances, and I have more recently supported and researched newborn and obstetric care in rural sub-Saharan Africa, particularly in Malawi and Tanzania.  I see a huge need for mOm’s new incubator concept and can clearly see the potential to have a great impact, throughout the world, saving more newborn lives.”