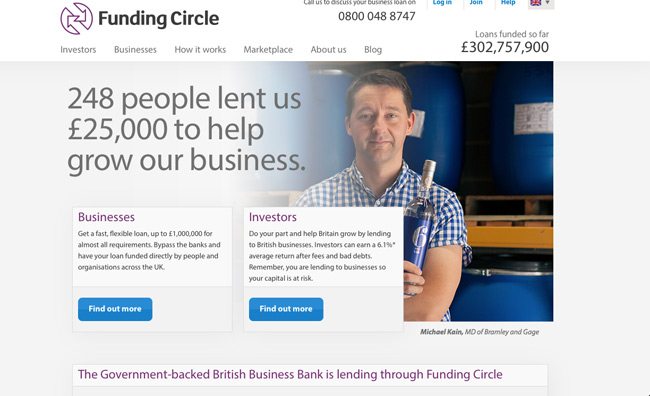 As the leading online marketplace for business loans, Funding Circle has helped over 5,000 businesses access the finance they need to expand and grow, creating an estimated 15,000 jobs1 since launch. Of the £300 million total, £100 million has been lent out in the first six months of 2014 alone.

Fashionizer Couture Uniforms, a specialist designer of uniforms for hotels and spas, borrowed through Funding Circle last year, and has just announced a major global contract to design and supply uniforms for the luxury hotel and spa group Six Senses Hotels Resorts Spas.

The contract comes as a direct result of the £67,000 investment, which included money from the British Business Bank and hundreds of individuals. The business has been so successful that the Deputy Prime Minister Nick Clegg and Business Secretary Vince Cable paid them a visit to see how the money was being used.

Debbie Leon, Managing Director at Fashionizer, said: “Fashionizer has been trading successfully since 1993 and had focused mainly on UK business with a number of European customers, but I knew that I wanted to move the business up to the next level and compete in the international domain. That requires expertise, hard work commitment and patience – all of which we had – but it also needs financial support.

“That’s where Funding Circle came in. After spending hours with banks trying to convince them that we knew our business and the opportunities available in our niche market, we hit a brick wall. When we approached Funding Circle, the whole process was very simple, efficient, and, importantly, decision-making was quick.”

James Meekings, co-founder of Funding Circle, said: “The growth we have seen over the last six months is clear evidence that small businesses place speed, transparency and efficiency at the heart of borrowing.

“Marketplace lending is increasingly becoming a mainstream part of financial services and there is significant potential for further growth over the next few years. We recently announced a partnership with Santander and this will create thousands more opportunities for small businesses to access finance and increase awareness of alternative sources of finance.”

By bringing together industry leading risk management and cutting edge technology, Funding Circle’s proven model enables businesses to access finance in a matter of days, directly from investors. To be eligible, businesses must typically have a minimum turnover of £100,000 and have been trading for at least two years.

The exponential growth of the industry has led to independent estimations that marketplace lending could account for between 10-20 per cent of the UK small business lending market in the next ten years. Independent research2 also recently predicted that the global industry could become worth $1 trillion by 2025.