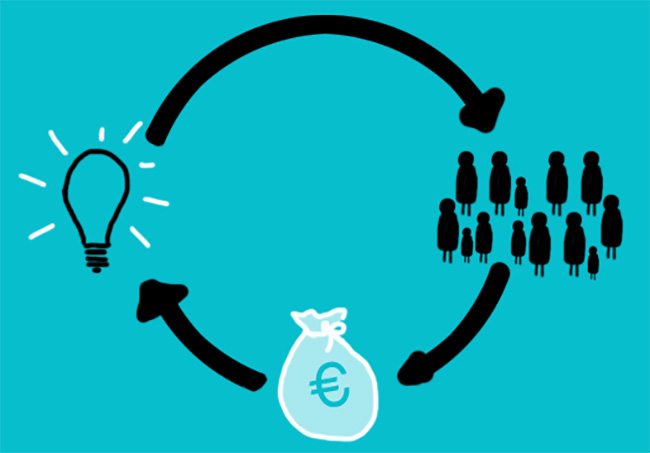 The increasingly popular Gadget Show, currently airing on Channel 5, will be coming to an end this May when the search is finally over for this year’s most must-have gadget.

The show’s eventual winner will be broadcast live on air later this year and we could be in for the next big smartphone, tablet or wireless vacuum cleaner in just a matter of months.

Certainly, these types of television show, whereby keen entrepreneurs try to acquire funds from high profile investors, are nothing new. You only have to look at the enduring popularity of The Apprentice and Dragons’ Den to see that these are the types of shows that draw in the viewers – but could they also be the new direction for entrepreneurs?

In the case of Future Gadget 2015, the competition which will feature on Channel 5’s The Gadget Show, crowdfunding is the central focus. The competition is sourcing a total of £300,000 in prize money using crowdfunding platform Seedrs. What makes this different from something like Dragons’ Den, then, is that investors do not immediately come up with the money upfront; instead, they invest in a competition process which whittles down entrants into a top three.

Part of the show’s popularity is the way in which gadgets are tested. From getting a sweat on by testing the latest fitness gadgets to even giving visitors the chance to try out the latest online game, The Gadget Show makes for particularly compelling viewing. For example, it proved the perfect platform for players to try out the latest release from Betsafe, Steamclock Tower, which tested the capabilities of smartphones and tablets.

Doubtless however, its crowdfunding element will also make for popular viewing. Paul Ephremsen, Founding Partner at Worth Capital, says: “Many of those who invest through crowdfunding platforms are not particularly experienced. What we’re doing is giving them the opportunity to invest in three companies that have been filtered through a competition. And in doing that we are making the chances of a successful investment more likely.”

In particular, the crowd-funding process has proven very successful in the field of technology. For example, on 23rd March, mobile software company Cyanogen Inc announced it had acquired crowd funding sources from such high profile names as Twitter and Telefónica, helping to push its crowdfunding total to £80 million.

At present, Android devices are open source, which has proven successful across a number of industries in the 21st century. For example, it is particularly advantageous for internet security – thanks to the basic principles of open source software, which allow more or less anybody to make amendments and updates, security flaws in Internet Explorer were brought to light when they were picked up upon by hawk-eyed developers.

However, while Android is open source, it is still essentially controlled by Google, as users have to download a number of Google apps. This is something which Cyanogen wants to do away with in order to create a technology network without limits.

This mission would not be possible without the help of crowd-funding, and as Future Gadget 2015 proves, this could be the way forward for the production of new technology in years to come. Innovation requires ideas, but it also requires funding – and crowd-funding could just be the answer.