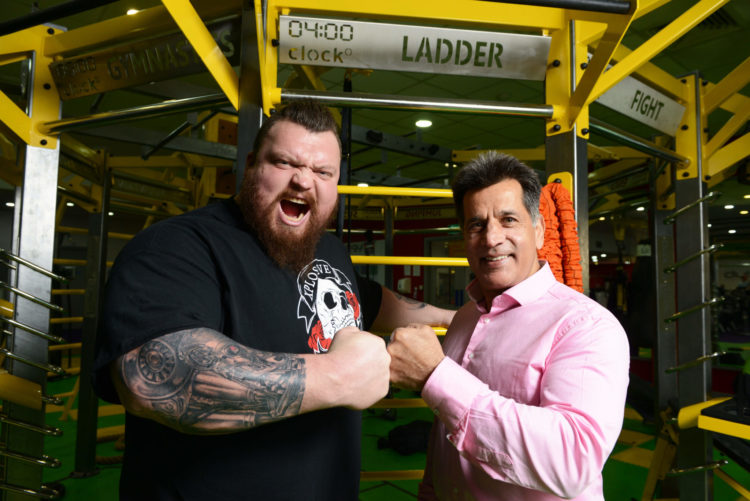 “I’d read stuff about Eddie and so knew about him and his achievements, but he wasn’t really on my radar until I attended a corporate function at Stoke City’s Britannia Stadium, near where I’m based in Staffordshire.

There were some big name footballers there, a few well-known darts players too, but then at the interval the MC introduced Eddie Hall. The reaction to him, and how he captured the room – all these hundreds of people, some of them famous in their own right – was unreal. I had never experienced a presence like that, ever. The physical size of this man – it was a truly jaw-dropping moment.

A few months later I was told by my management that Eddie had joined my M Club fitness centre. That gave me the opportunity to introduce myself to him, although again I didn’t want to march straight up to him and say ‘hello’. It would have felt odd.

As it was, I’m a stickler for detail and cleanliness with my businesses, I like to make sure everything is correct, and I was walking round the changing-room one day and there was this big bloke in the showers!

“Hello, Eddie,” I said. “It’s the first time I’ve seen you without clothes on!” Those were the first words I said to him.

From there we had a few chats. Early on, I asked him straight up if he genuinely thought he could become the world’s strongest man. He said he could.

More than that, though, I tested him a bit, used a bit of psychology. “I watched the World’s Strongest Man on TV last year,” I told him, “and I thought you did well to finish in the top ten, but when it came to the top three I felt you were in awe of them. You were daunted by them. You didn’t handle yourself as well as you could because you became subordinate to them.”

“Well, that’s my perception,” I said. “I think you were overawed.”

I looked at him. “We need to change that then, don’t we?”

I like to get down to the nitty-gritty. “What’s it going to take to take,” I asked him, “for you to become the world’s strongest man?”

“It’s a dream,” he replied, “but I’m not sure it will be fulfilled. There’s no money. I work full-time, have got a family, and basically there’s no time to do what I need to do. At the same time I’m competing against guys who are professionals.”

“What if you did go full-time? Do you really think you could do it? No nonsense – just tell me.”

He looked me in the eyes. “Absolutely. I just need the chance.”

At the same time this was happening I was reflecting on my own life. When it came to sport I was good at a lot of things but never the best at anything. Then I thought of my dad. He was a strongman in Pakistan.

In fact, if it wasn’t for his ability we wouldn’t be in the UK.

To provide lifelong security for his family, Iqbal had signed his allegiance to the army. Inside, however, he dreamed of forging his own path. So when a monsoon struck, and his commanding officer’s jeep became stuck, he seized his chance.

“If you can pull me out,” stated the officer, “name your price and I will reward you with whatever you want.” Having performed the impossible, Iqbal stunned his superior. “I want out the army,” he told him. “I want to go to England and make a fortune.”

My dad was a poor man in the middle of nowhere with a God given talent. How much further could he have gone if he’d had some support? Meeting Eddie all these years on seemed like destiny. It was a utopia moment. I realised straight away it was a chance to change someone’s life, realise their dream, and to give myself that satisfaction, that pat on the back, that no-one would be able to take away from me.

That realisation all happened in about 20 seconds. Instinct took over. Within 15 minutes I’d made him an offer.

The man nicknamed The Beast almost crumbled in front of me. “I don’t know what to say.”

I told him I would give him a three year investment. “If you haven’t got the title after three years,” I said, “you’re never going to do it.” All the time I could see my dad looking down on me. ‘Well done, son. You’ve seen a talent and now you’re going to nurture it and give it the best chance possible.’ It felt so natural. It was meant to be.

Eddie wanted me not to sponsor him, but to manage him. It made sense. We entered into a contract where I would be responsible for all his commercial affairs. The final decision would always be mine, and he was fine with that.

He saw in me an older figure, commercially very experienced, who could protect him and look after him. He realised it was a big wide commercial world out there which could chew him up and spit him out very quickly. He might be physically the strongest, but that doesn’t mean that commercially he’s the strongest.

He needed someone to take all the big decisions, to park that side of things so he could concentrate on what mattered. Fees would need to be negotiated, contracts put into place – TV, media, sponsors – his diary would need to be sorted, public appearances, that kind of thing, and that requires a lot of effort. He needed that support infrastructure, someone to take care of all his needs.

I set out some ground rules. “I’m your manager, so effectively I’m your boss.” I had to put a marker down. But to this day I’ve never exercised that. We’ve always consulted with one another – effectively, I’ve brought him into that decision-making process.

Right from the start, it was obvious there were similarities between us. We’re both straight-talking, we both had a hard upbringing, both had stick at school. We also enjoy a laugh – we use humour as a release mechanism. And we both wear our heart on our sleeves.

Having an older person around has been an attribute. There’s been occasions where he’s got a bit heated with people on Facebook and I’ve had to calm it down. When it matters, he listens.

When he’s in competition, on the other hand, I won’t go in the prep area. It’s his domain. I stay back. I‘m only there when it’s really necessary. I’m not there to take his limelight. My glory comes from being part of him, part of his story.

I’ve always been a person who’s wanted fun and excitement in my life. I live for that. I consider myself a bit of an adventurer. I’ve done various challenges and explorations. Business can sometimes be a little bit dull if you’re not careful, so I try to do things that are inspiring and creative.

Working with Eddie inspired me not just personally but in my business affairs. Positive energy is very contagious. It was an unknown journey – and in any journey like that there’s elements of danger, excitement, challenges, and that’s what makes it exhilarating.

Boxing management is a tough world, but I’ve been in business a long time. I can handle that.

I’ve always lived for a challenge. Business itself is a challenge. Every time you take on a new business it’s exciting. It’s unknown territory. I’ve always loved history, and reading how adventurers discovered new worlds. They will have dreamed of finding those places, and then they found them.

My dream was helping Eddie become the best in the world. Your focus then is making that dream a reality. If you’re focused, and geared up for the end goal, whatever happens on the way will be overcome. That’s exactly the same as business – a journey with knockbacks, blind turns, and moments you slip up. But you keep going and going until you reach the end.

Every challenge he overcame, every hurdle he achieved, I felt I was achieving them too. I was receiving that positive energy, which helped my thought process and made me more energetic and ambitious.

I’d originally planned to go with Eddie to him to Botswana for the World’s Strongest Man competition, but I’d travelled a lot in the run-up and was tired of long haul flights. I decided to defer, and if it was closer to home next year I’d go then.

Instead I went for a weekend away in Cambridge with my family. In all honesty, if he’d come second I would have seen it as good progress, but a fan of Strongman sent me a private message on Facebook – ‘He’s done it!’

I couldn’t take it in. It was such a shock. I was in cloud cuckoo land, just floating. It was one of the proudest moments of my life. Eddie later sent me a private message thanking me for my part in his success. “I can’t thank you enough.” And he publicly acknowledged it too. Since then Eddie has had a book out, done countless talks and public appearances, and a host of other sponsorships have come his way.

That said, getting involved with sportspeople doesn’t always work out so well! Some years before, I was approached by a sports agent who was a friend of mine. I’d been meaning to get involved with athletics for quite a while. I love the sport and I love working with talented people.

Alex Nelson was a sprinter. He had a chequered history with injuries but was the best 200metre runner in the country and had qualified for the Beijing Olympics.

His coach told me he needed warm weather training, so there was some funding put together to allow him to do that. But these things don’t always work out. Sadly, he had another injury that was career ending and that was that – he never actually ran in Beijing.

I get endless approaches for sponsorship but I have to be inspired. In the last five years I’ve been sponsoring a boxing club, Wellington Boxing Academy, in Stoke-on-Trent. Part of that is sponsoring the bantamweight Shabaz Masoud. He’s just been selected for the GB squad for the Commonwealth and Olympic Games. There’s a lot of talk about him being a future world champion. The idea is I’ll be his manager.

Boxing management is a tough world, but I’ve been in business a long time. I can handle that.

As a businessperson, involving myself with sport has delivered personal gratification, confidence, and a sheer sense of wholesome satisfaction. It has reignited ambition, given me clarity, and re-motivated my own business life. It’s a fuel, a medicine – one that has helped me redefine my ambition and business.

Together that puts you in a good place to enjoy and appreciate your own life.

If you’re happy in yourself, other good things happen.”