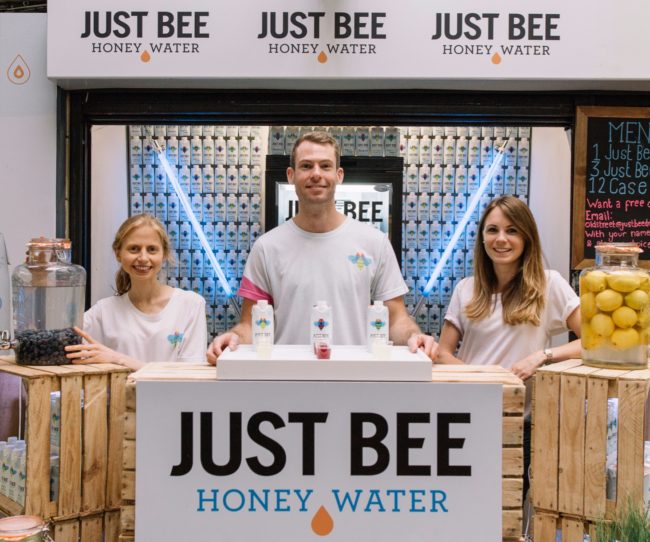 Amongst the never-ending list of products that go up to face the Dragons were Just Bee, who pitched in the latest series.

The 100 per cent natural, honey-sweetened drinks generally received good feedback from all Dragons, but one in-particular was showing more a firmer interest than the others, Peter Jones, who decided to make the budding entrepreneurs an offer of £65,000 investment for a 25 per cent equity share – which the company decided not to accept. 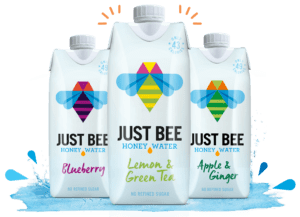 However, this potential knock-back did not stop the company from progressing in their listings, as they are now stocked in Waitrose, Boots, Holland & Barrett, Selfridges, in addition to independent retailers across the UK.

After tasting the Just Bee drinks – and having loved them, I was literally buzzing when the opportunity arose to interview one of the people behind the brand, Andy Sugden.

In his own words, “Just Bee is a spring water drink, but the difference is instead of using refined sugar or artificial sweeteners, we use honey for the natural sweetness in the drinks. Because we’re using honey, it’s all completely natural with a very low sugar content, as well as a much lower calorie content than a lot of traditional soft drinks. This makes it a more natural alternative. We have three flavours: apple and ginger, green tea and lemon and blueberry. ”

Andy works alongside the company’s other co-founder, Joe Harper who is quite the bee champion. Following in the footsteps of both his father and grandfather, Joe is currently training to be a beekeeper, keeping the occupation a very much generational trend. So, from an early age, Joe was familiar with using honey as a substitution for sugar, in tea and porridge, but what about Andy? How did Joe manage to get him on board with the idea? I was intrigued to find out. 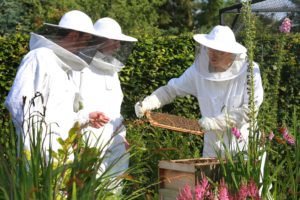 “Joe and I have been friends for 10-11 years now and we’ve always said to each other that we wanted to set up our own business, work for ourselves and do our own thing but never came up with the right idea.” Andy shared. “There were plenty of conversations in the pub where we said ‘we could do this’ or ‘we could do that’ and they’d feel like really good ideas at the time, but you’d wake up the next morning and think ‘maybe that wasn’t an idea actually’.

“It’s coming up to 3 years ago when Joe said ‘why don’t we do this idea of making drinks but using honey as the natural sweetener?’

“We just thought, there’s so much in the press about sugary soft drinks that are always so bad for you, why don’t we go and make these refreshing, healthy drinks using honey? – that’s how I got involved. Joe said to me this idea and I said ‘yeah let’s go for it, let’s try and make it happen!'”

With the negative, high-sugar content stigma linked to soft drinks in the press, along with generally unhealthy products within the food and drink sector, I was curious to find out that with the branch of companies launching new healthy products, did Andy feel that Just Bee would be threatened or affected by these potential upcoming competitors? “I think it’s a positive thing. I think that if you went back 10 years ago, there were your big global, traditional drinks brands, but now I think it helps that there’s lots of people bringing out new quirky, interesting drinks and I think because there’s lots of people doing that, it overall raises the profile that you don’t have to go to these traditional brands anymore and that there are these different healthy alternatives that you can try.

“So overall, I think these new brands are a positive thing and for us, because we have a strong USP in using the honey and the backstory with Joe being in a family of beekeepers, I think that puts us in quite a strong place and we’re very different to anything else already out there”

When trying to delve into the future prospects of the Just Bee brand, it was clear that the focus is on drinks products at the moment and eventually expanding the flavour selection. However, due to the versatility of the brand and the consequent versatility of honey, food products cannot be ruled out for the future of the brand. 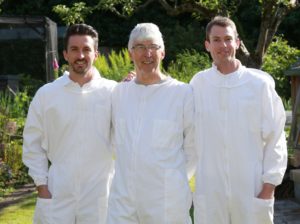 Andy commented: “As the Just Bee brand, what we’re trying to do is use honey in a healthy, different and modern way and that doesn’t have to be limited to drinks, but that’s where we’re focusing at the moment. It’s still very early days so that’s where we’ve got to put all of our energy and effort but in the future, who knows? Because honey is such a versatile product.”

So why did Andy and Joe go into the den? After admitting that they were already fans of the show, they decided to sort of jokingly apply and pitch their fairly basic, business idea to the producers of the show in an audition. At this time, the pair hadn’t even created the product yet, but the producers clearly liked the idea as after their initial rejection to appear on the show, around a year later Just Bee was asked to make a return.

Andy stated that it would have been “amazing” to work with Peter Jones, and his offer was “very tempting” but the equity stake he wanted in the business exceeded the amount the company was prepared to give away.

But what about the idea Peter proposed? For any Dragons’ Den fan, you may be awaiting the release of Just Bee’s pocket sized cordial – a product idea of Peter’s. However, sadly Andy explained: “It’s something that we have looked at and as far as we can tell it’s not actually possible to do. What you would need to do is effectively concentrate the honey – we have found a process that can do that but it would involve using additives and chemicals, which is just completely against what we’re trying to do, which is to create a completely natural brand. So, although we’ve found a way we can do it, it’s just not right for our brand and what we’re trying to achieve.”

From having previously received investment prior to entering the den, I wanted to find out, when did the business know when to seek funding/angel investing?

Andy answered: “For us, we spent the first six-nine months of the business doing everything on a shoestring budget, which was myself and Joe’s own savings.

“If we needed to pay for something we would try and get it at the lowest possible price. What we were trying to do at that time was effectively trying to prove the proof of concept, so we started selling in the local shops around Manchester where we’re based.

“We wanted to find out: are the drinks selling? What’s the feedback from the customers? How quickly are they selling? What can we do to improve sales? So we were learning on a small and fairly cheap level.

“Once we built our confidence up in Manchester, we started to do it in London.

“You can go to your angel investors and say ‘look, here’s what’s happened over the last six months’ and they can see all the sales and give advice which in turn helps you raise more money.” 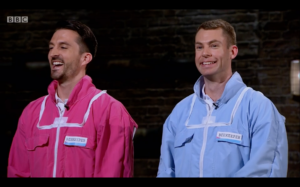 With over a 10 year friendship, I wondered if it’s difficult to actually work alongside a friend in a business situation. Andy responded: “I actually think it’s almost the opposite because we know each other so well and because we’ve been friends for over 10 years. I don’t think we’ve ever had an argument! I think, if I begin to get annoyed by him he’ll back off and equally if I see he starts to get a bit annoyed, I can back off, so because we know each other so well, it really helps us work well together.

“I think it’s a massively positive thing. It’s hard work, but running a business is quite fun as well and sometimes it doesn’t feel like work. Growing a business can seem like a hobby and it’s quite nice to be doing that with someone that you’re really good friends with.”

Anyone building a business arguably takes inspiration from others in some type of way. So, who were Andy’s inspirations in business?

“In my old job, I was doing business advisory work, so I was fortunate enough that before starting Just Bee, I worked with quite a few people within Manchester and the North-West who had a range of different successful businesses that they had spent 10-15-20 years growing.

“Helping them in their businesses is what really pushed me to go and think ‘actually, I really want to give this a go myself’.”

Considering the amount of experience Andy has accumulated over the past few years, he shares some advice to anyone who wants to start a business:

“It’s hard work and never easy, but you’ve just got to give it a go. I think there’s a lot of things that Joe and I have done over the past two years where they haven’t worked out and things have gone wrong, but I think that’s just the nature of the startup business. You’ve just got to realise that that’s what it’s all about, some things with work, some things won’t work but if you don’t give it a go and try to start with, then you’ll never find out. If they don’t work, stop doing it and if they do, do more of it.”