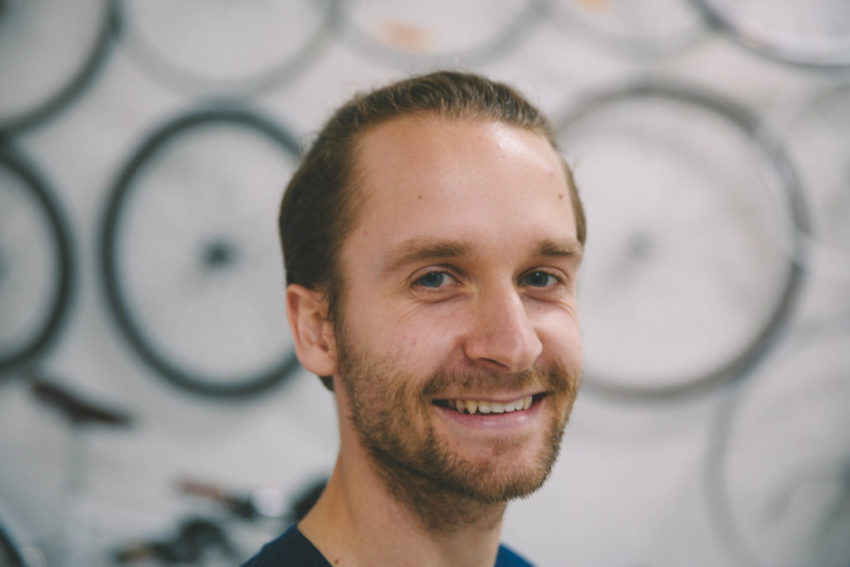 Oliver Montague joins us at Business Matters to talk about the inspiration to develop a kit which tuns a normal bike into an electric powered.

What do you currently do at Swytch Technology?

We just launched our updated Swytch eBike Kit, which is the world’s smallest and lightest eBike Kit.

Our kit is super easy to fit, just replace your front bicycle wheel with the Swytch motor wheel, clip a lightweight 1.5kg power pack to your handlebars, plug it in and you get 250W power for 50 miles.

What is the inspiration behind your career in business?

I guess to cut a long story short, my inspiration for a career in business was the product and invention itself that I have gone on to sell.

I never thought of myself as a business man or entrepreneur when I was at University – most people would have guessed I would go into a PhD or some kind of techy consulting job. However my love for making eBikes and the “eureka” moment when I had the idea for the Swytch eBike Kit invention meant that I didn’t really have a choice but to go into business with this idea.

Another key factor for my career as an entrepreneur was the experience I had as an engineer doing internships during my degree, where I saw that the highest up you could get as an engineer was still a few rungs below where the decisions got made.

After University I became a chartered accountant after University. I managed to move sideways to specialise in Sustainability (Carbon emissions) Auditing to fact check the CO2 emission declarations that FTSE 100 companies publish. I still got the chartered accountancy training (ACA) which has set me up for life with the know-how to keep the books and watch the numbers in any venture I go into.

I have been building eBikes for fun since University (Engineering Science, Oxford University). During , then after University I ran an online shop selling eBike kits to people to make some pocket money on the side.

Marketing first, engineering second. I learned the hard way that companies with great marketing do better than companies who just have great products.

My core philosophy for WHY I do business is that it’s the duty of innovators to make cool technology that is also environmentally friendly. Because it’s cool, people will WANT to use it, and because they use it, the world becomes more sustainable.

I admire anyone who sacrifices their earning potential for doing what they love.
I tried the regular career path but I found myself following the path that a small number of my peers were also taking which is to break out and do your own thing – with much less income, and much more risk, but much more sense of satisfaction.

Have more fun – I worked VERY hard at University and didn’t socialise much. I only really came out of my shell as a social, strangely, when I started working in the corporate world

What advice would you give to someone starting out in your career?

Don’t worry about having THE idea that no one else thought of – you’re unlikely to be the next Zuckerberg or Steve Jobs. However – if you can do something markedly better than everyone else, or improve a concept so that it changes from being niche to mainstream, then that’s enough to run with it and build a career as an entrepreneur.

How do you continue to grow professionally?

I embrace the internet – I’m somewhat of a jack of all trades so I prefer getting an overview of all the cool interesting stuff and ideas that’s out there as opposed to diving deep into one topic for a whole month of reading. Youtube, Google, Tech Journals – that’s my innovative thinking fuel.

What are you working on now?

We have just launched a new eBike Kit, and I am getting ready to start on an Innovate UK project that we got match-funding for. This is to develop a hybrid sharing eBike system.