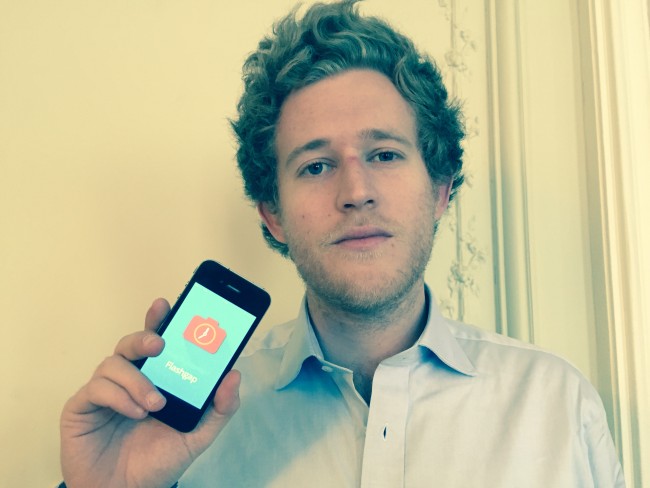 What do you currently do?
I am the co-founder and CEO of Flashgap, the time-delayed photo sharing app inspired by The Hangover.

This is an app which allows friends to create a shared photo album at an event or night out, with images collated from all members of a pre-selected group. However, the images and videos taken throughout night via the app disappear instantly, only to be revealed the day after, at noon precisely, allowing the group to discover the night before from new perspective once memories have become hazy.
I founded Flashgap with three friends in December 2014 in our native France – we were all recent graduates in our twenties, simply inspired by the ending credits of The Hangover. We used to take a GoPro on our nights out at University, strap them to our foreheads and pass it on from forehead to forehead to take footage through out the night. The next day we used to all wakeup in the same flat, and plug the Gopro in a TV screen and enjoyed watching the footage back the next day. The experience was so fun that I said that we had to “scale” this emotion with an app. We differ from other apps like this because of the surprise element of discovering every picture and video the next day. We also offer a group chat for friends to debrief each other about the night before. In essence, Flashgap allows users to be ‘ready for yesterday’.

What is your inspiration in the business?
I’m not inspired by fortune or success; I’m inspired by game-changing visions. One of the phrases that inspires me the most is what Steve Jobs said: “The ones who are crazy enough to think that they can change the world, are the ones who do”. A game-changing mentality is what drives me every single day, on a personal and professional level.

I was inspired to become an entrepreneur as a child. I was dyslexic and was always behind in class. I actually failed my final exams and saw all my friends leaving for University, as I had to stay one more year in school. For me that was a real defining moment, when my confidence was rock-bottom. Teachers telling me, “We told you, your work wasn’t good enough” – I can still remember the exact words of my maths teacher advising me to drop out and find a job. Since that day I firmly believe I’m in control of my own career path.

Who do you admire?
If I had just one choice I would probably say: Simon Sinek.

He always seems to be three steps ahead everybody else, and his vision for marketing and motivation is simply brilliant. When he talks about selling or branding a product he actually never mentions markets or clients. He only talks about how the brain reacts emotionally to certain situations. His beliefs in using biology to understand business nowadays is mind blowing.

Looking back are there things you would have done differently?
Almost everything!

When you study business and finance at University you believe that your degree with help with several aspects, but in fact it’s quite the opposite. People believe (and I did too at the beginning) that building a start-up is similar to building a company, which it’s not.

Today the aim of a startup is to differentiate itself from everybody else. To stand out from the masses. Forget what you’ve learnt, because almost everybody learned the same things. To stand out you must swim the other way, change your mind-set; believe in your unique ideas, even if they sound stupid at first. That’s what I would have done differently.

What defines your way of doing business?
This may sound a little bit clichéd but I define my way of doing business with “contribution”. I believe the most powerful way of motivating teams in business is to make them feel they have contributed. The best way to feel this way is to see the direct results of your hard work. I remember in my internships I used to work hard for several weeks on the same project, and never see the direct results of my work for the good of the company. I felt completely useless. At Flashgap everything that is said about the app is reported to the entire team, to show them the results of their actions. Knowing that people love what you do gives you immediate empowerment.

What advice would you give to someone just starting out?
There are so many little pieces of advice to give, such as avoid everyday traps or to make more time.
Here is biggest piece of advice I can give:

Hire people that are smarter, better and more efficient than you. If you hire people who are less effective, you will end up doing their work for them. At the end of the day the CEO and founders of a start-up should be less qualified and less effective than every other person in the company. Forget your ego, this isn’t a contest and don’t believe that people who are smarter than you won’t respect you, or support your decisions. On the contrary, they know if you are in your position, you’ve worked hard to get there. Hard work is the easiest way to gain respect in a company.

The real job of the founders is to be the most informed – since they are the ones making the decisions they need to know absolutely everything going on industry-wide, with clients, competitors and employees. “Any man who is misinformed can not help reasoning wrong.”