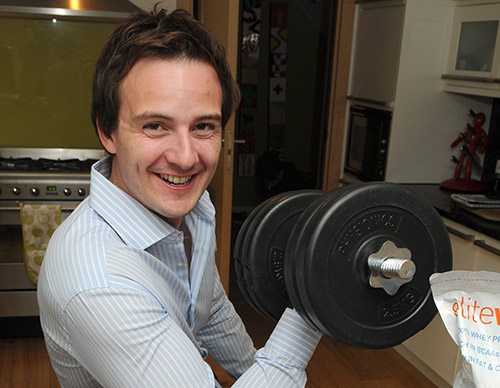 Help people stick to a high protein diet, without paying supermarket prices on meat through our online store MuscleFood.com.

I decided to start this, because I could see that although there were hundreds of gourmet meat websites, there were none which were tailored towards the high protein diet on which athletes and bodybuilders rely.
This diet requires at least six protein based meals a day, that’s a lot of meat. But, because they eat so much they need to buy it at prices which are lower than supermarkets.

To deliver high quality meats, at lower prices than the supermarkets we cut out the middle man and went direct to the producers.

We then tailored our offering to the athletes, for example all steaks are trimmed of excess fat, all chicken breasts are trimmed and have no added salt or water and we added innovative products like Protein Bread.

What is your inspiration in business?

It is amazingly simple, but the number of people who think it is “ok” to delay sending you what they promised by a day or delivering good when they say they will is staggering.

If you do what you say you are going to do consistently, then that inspires me to ensure our team give you the same back in return.

Business is a game, it is a choice and some are better at the game than others but ultimately although I respect many of my peers, I don’t admire them because ultimately creating a businesses is generally a selfish quest – something for yourself and your family.

So my admiration is for those people that have created businesses that have a more life changing goal in mind, and one company springs to mind – Pennies. They have generated over 6,000,000 donations just by allowing people to round up their bills online and in restaurants – all for charity.

I think it is a fantastic idea, fantastically executed and with the aim of benefiting others more than themselves.

Looking back, would you have done things differently?

The business is such a passion for me that I have either lost touch or not invested enough time into my friendships – especially those that I made at University.

It was a conscious decision, but back then there was no Life/Work balance unlike now, where my girlfriend Felicity ensures there is no chance of this ever happening again by ensuring I make time for everything.

Chaotic. I see an idea and I want to pursue it. Everything is possible, but I don’t want it to be possible in a month – I want it now.

This can sometimes cause issues for my team, who have to pick up the pieces of my approach – but generally the end result is a good one.

I try and avoid game playing, long negotiations and politics – but this can certainly be seen as a sign of weakness and we have been taken advantage of by bigger companies.

Trusting someone really can get you in trouble, because ultimately the bigger companies tend to care about one thing – their profits and not moral ethics.

It isn’t difficult. I read a quote by Deborah Meaden saying “you have to love every minute of business to be a success” – this type of comment sets unrealistic expectations on people.

There are some days that I hate work, I literally hate the fact that it is a Sunday and I am in the shower and all I can think about is how the supplier meeting will go on Monday…

Does this mean I should give up? Because after all, Deborah says I must love every minute to be a success – no of course it doesn’t… So my advice would be to ignore most of what you read, in fact stop reading, just crack on.

And find something that will get people talking about your business. We lose money on our 5kg of Chicken Breasts for £25, a saving of about £20 on supermarket prices BUT people tell others about it, and that investment is worth it.