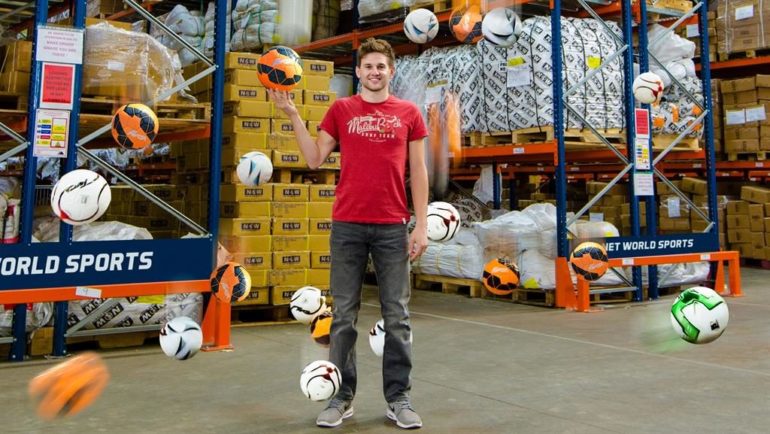 As A-level results have been announced today with many looking at university next a list of the UK young entrepreneurs with the highest net worth estimates, who didn’t go to university has been revealed

At the top of the list is entrepreneur Alex Lovén, who has a net worth of £55 million at just 30 years old. Some of the most famous names on the list include YouTube mega-stars Alfie Deyes and Zoe Sugg (aka Zoella), MC Michael Omari (AKA Stormzy) and The Only Way Is Essex star Tommy Mallet.

Informi has compiled this list as a source of inspiration for those receiving their A-Level or GCSE results this month.

Steven Drew, Informi spokesperson, said, “We compiled this list of successful entrepreneurs to show how financial success is not dependent on going to university. If you have a passion and hit upon the right business idea, you can succeed as these entrepreneurs have.”

Alex Lovén (pictured) set up his sports retail company, Net World Sports, in 2009. The idea came to him after he bought a cricket bat online then wrote to the supplier to find out what the wholesale price was. He bought several of the bats at the wholesale price, and sold them to friends for a profit. Lovén owns 99% of Net World Sports and the company made profits of £5 million on nearly £20 million of sales in 2016-17. The company has won multiple business awards.

Cator’s business idea began when he was 16. Frustrated with his school’s computer network blocking gaming and music sites, he decided to use a VPN (Virtual Private Network) website to access his favourite sites. Cator felt that the current VPN services weren’t of the best quality, so he decided to create his own, and Hide My Ass was born. He sold his company (Privax Ltd, parent company of Hide My Ass) for £40 million 10 years later and now continues as Chief Executive.

In just over a year Ruparelia’s firm has already been valued at £12 million and he has sold £100 million worth of homes. The 19-year-old is now one of Britain’s youngest millionaires. Doorsteps.co.uk began when Ruparelia, a young carer, was introduced to the real estate world where he felt commission fees were unfair. Hence, after being inspired by Ryanair’s founder, he set up his own real estate agency which cuts out commission fees and charges just £99 for its services. Despite his success, Ruparelia only pays himself £1,000 a month because he says he’s ‘in it for the long-run’.

Jamal Edwards starting building what would become media empire SBTV, when he was given a camera for his 15th birthday. Edwards began by making amateur music videos just for his friends, but his talent means that he has now gone on to work with the likes of Drake and Nicki Minaj. SBTV now has over 1 million subscribers on YouTube, Edwards has been made an MBE and became a member of the Sunday Times Rich List. The author and entrepreneur even counts Sir Richard Branson amongst his friends. He believes that a business should start with a passion, rather than a desire for money.

A YouTube mega-star, Zoella has dipped into several entrepreneurial ventures. She has written books, created a beauty and lifestyle range and has a wax figure of herself at Madame Tussauds London. Zoe (or Zoella) has shot to stardom through her YouTube presence, posting various lifestyle, beauty or vlogging videos. She has amassed over 12 million subscribers and has a strong network of super-fans. Her products have been widely successful: her book Girl Online becoming a number one bestselling debut novel and her products being stocked in Superdrug stores nationwide. All of this born from ‘haul’ and ‘favourites’ videos.

This YouTube mega-star has accumulated over four million followers online and has also got a wax model of himself at Madame Tussauds. He launched his channel in 2009 whilst in school and now has an online empire. Deyes has a merchandise brand as well as two published books, with plans to continue releasing his entrepreneurial endeavours. He rejected going to university (despite having an unconditional offer) to continue his passion of making videos. A smart choice, considering his various vlogs reportedly earn him up to £1 million or more each year. He and fellow YouTuber Zoe Sugg are engaged, showing prospects for their united ‘Zalfie’ brand to grow even more.

This London-raised MC rapper has recently announced his partnership with Penguin Publications. Curated by Stormzy, and launching with his first book Rise Up in November 2018, #Merky Books will form a home for a new generation of voices. Stormzy wants his platform to inspire young writers, explaining that writing is what helped him get to where he is today. Stormzy’s successes has meant he has won multiple awards and even hosted a Q&A panel at Oxford University, despite never actually going to university himself. His music business, #Merky Touring has built towards his success but it is likely that his new publishing partnership will further boost his career.

Here, we have another famous YouTuber. After finishing school, Burr took a short course in make-up artistry and from these skills created a YouTube channel, posting make-up tutorials. She now has over three million subscribers and a cosmetics line sold nationwide in Superdrug stores and on online retailers such as Feel Unique. This goes to show how easily a passion can develop into a successful business. Burr advises that being active on social media is one of the ways she has achieved business success.

Doherty began his business when he was just 14 and had a business breakthrough at just 18. He became the youngest ever supplier to a major supermarket chain when Waitrose launched his range in March 2007. His business, Super Jam, is inspired by recipes from his grandmother and now supplies over 2,000 supermarkets around the world. His success has meant that he has won multiple entrepreneur-related awards and has also published a book sharing his jam-making secrets which has gone on to be a bestseller. He has also given hundreds of motivational speeches on his success at universities and conferences around the world.

This TOWIE star comes from humble beginnings. As a child, he was bullied at school for not having the latest and most fashionable shoes. It is from these experiences that he set about beginning his own footwear brand at 15: Mallet Footwear – a designer shoes brand that has sold over 150,000 pairs since its launch. The brand started selling shoes online and 2016 footwear chain Choice started stocking Mallet’s products. Mallet footwear has out-sold big brands such as Michael Kors and has several celebrity customers including Drake and Olly Murs. Despite growing up on a council estate and having dyslexia, Mallet’s business is predicted to make £4 million this year!

Steven Drew from informi which carried out the research adds: “University is useful for a number of reasons and for many thousands of people. However, success can be found in a manner of different routes as these young entrepreneurs show.

“Nowadays the resources available for those interested in starting up a business, from online information to training courses and qualifications, mean that there is a growing potential for young entrepreneurs to fulfil their dreams and ambitions. Any potential entrepreneurs should ensure they look to find what support is available for them and take advantage of it. These ten entrepreneurs will have had significant support from a variety of experts in different fields to help them get to where they are today.”